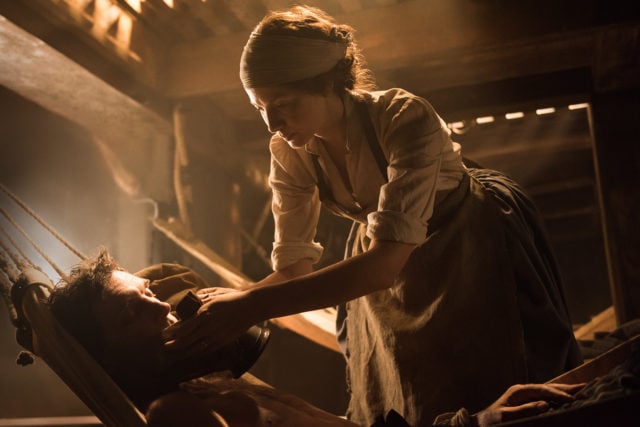 The upside to Claire and Jamie’s periods of separation on Outlander is that they each show their individual strengths. They’ve had to do so once without hope of ever seeing each other again. At least now they are in the same century, traveling the same ocean. What are they to do but stick it out on their respective ships? Claire in particular displays incredible strength in this week’s episode by upholding her Hippocratic oath under extraordinary circumstances. It’s not the first time, and it won’t be the last.

No one can really understand how much Jamie and Claire have been through to find their way back to each other. If they did, they might have had a little more understanding with Jamie’s reaction to seeing Claire being taken away on another ship. I say a little, because there were few besides Fergus and Mr. Willoughby who had any sympathy to the pain Jamie and Calire felt being separated. Jamie goes out of his mind, going so far as trying to convince Fergus to start a mutiny. Fergus would do anything for Jamie and Claire, but not if it means putting them all at risk. That’s not to say he doesn’t consider it. Marsali backs his logic with Jamie, and it’s the first time we really see her as more than just Laoghaire’s opinionated daughter. She truly loves Jamie as a father, and she is truly in love with Fergus. She needs both men to be on the same page, even if it is to save a woman she doesn’t like.

Claire has a little bit of an easier time by keeping herself occupied. Focusing on her patients kept Claire sane for 20 years without Jamie. More importantly, it’s who she is. Claire does not dwell on what she cannot control. She explains to her fast friend Elias Pound that compartmentalizing is the only way to save lives. On a ship full of men who partly respect her and partly resent her, young Elias is her only friend. He is by her side, unquestioning in his loyalty. Whatever she asks, he does, because he trusts in her knowledge and care. When he succumbs to Typhoid Fever himself, Claire feels alone for the first time since she’s been back.

Claire doesn’t have long to grieve. She has bigger things to worry about when she realizes that the Captain knows who she and Jamie really are. This is a young captain, one who is trying to make a name for himself. It’s not that he isn’t grateful to Claire for stopping the spread of the disease on his ship, but he prides himself on being an honorable servant to the crown. His loyalty comes from a genuine place, and Claire can’t fault him for that. Though it puts her in an impossible situation, one that the ship’s goat herder is willing to help her with.Â Annekje Johansen is Claire’s hero for trying not once, but twice to get Claire off the ship (#feminism). She does indeed get her off the ship, but Claire is going to have to swim with the strength of an Olympian.

This may have been Claire’s most powerful episode to date as a physician. How best did Claire represent the feminism of both her time periods?

Claire compartmentalizes her priorities in an outstanding hour of Outlander that shows her strength as a physician and a woman.