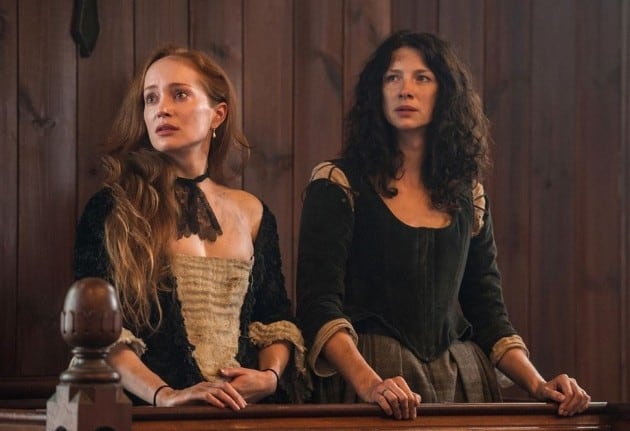 I love Outlander; really, truly love it. It’s got a beautiful setting, strong characters (and actors to fill them), and the plot they’re creating is as interesting and bold as anything on television. It discusses feminist ideology and perception v. reality and all sorts of things that fascinate me. The first half of this first season was essentially perfect to me, save a few moments here and there.

The reveal of Geillis as a woman from 1968 just blew my mind. Blew it out of the water. It makes so much sense, and was set up so subtly. There was a throwaway line in the first episode of the season in which Jamie asks what “f***ing” meant, and it’s played as just a cutesy little moment that reminds us of the past. But then, (and I didn’t catch this till after), Geillis realizes that she’s going to die, and she yells at Claire, “Looks like I’m going to a f***ing barbecue.”

Her reveal as a woman from the future was incredible. There are more time travelers around; Geillis obviously knew how to get back and could’ve done so, but decided against it. She really believed Claire had been sent back for a reason; perhaps Geillis’ goal had always been to change the past and therefore change the future? Did she really come back, from 1968 (23 years later than Claire), to help the Jacobites win? There are so many possibilities now.

I was also really impressed to how they wove the themes of the show throughout this episode. The two female witnesses were routinely challenged and almost made to look foolish, but Laoghaire (exemplifying the catty stereotype of women), the priest, and the crazy guy were never challenged. The women weren’t believed but the men went unchallenged. The message was clear: women are not to be trusted, even by other women.

So for Jamie to accept Claire’s word, without hesitation, says a lot. It was another step down the path of Good!Jamie, which is where he should be. Jamie is the “Superman” character of this show; he doesn’t have to go dark to be interesting, because the fact that he’s light in a time where there’s so much darkness is interesting on all its own. His reversal of the power dynamic was really awesome.

Jamie taking Claire to the stones, without any fuss or muss, was also incredibly sweet and caring. He truly is the only thing holding her here, and the fact that he was willing to give her up so that she can live a happy and safe life in her own time was really wonderful.

I’m not sure, though, if I buy the idea that Claire wouldn’t go back to her own time. Jamie was spot on when he said that the only thing on this side of the stones was “violence and danger.” Claire is always going to be at the mercy of men; always going to be in danger of assault. There is something to be said, of course, of not backing down and taking what is yours, but it’s one thing if you’re from this time and are trying to change things in the future than it is, you know, to actually be from the future. Claire should’ve gone back.

But anyways. This was a really great episode of Outlander, and it really made me happy to watch the show again. I’m so excited for the rest of the season and beyond.

– Geillis Duncan was a great character, and I hope we see her again.

– Jamie arriving at the last second to rescue Claire was incredible.

– I hope Ned Gowan is okay. He was willing to die to save Claire’s life. That’s also pretty incredible.

– Colum, I think, knows about the time travel.