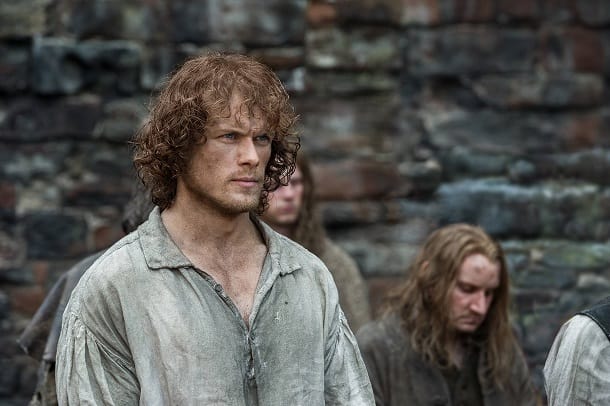 I love character-driven television. I think that exploring characters is the way you create great television, film, and written texts. I am a firm believer that characters have arcs, and that sometimes their arc is complete and they need to be sent off to the great big Wikipedia list in the sky.

OutlanderÂ is character-driven television. I don’t watch for the time-travel stuff (though, trust me, I love it), but for the expression of Claire’s character through her feminist ideology. I watch to see Jamie struggle with being a man in such a bizarre circumstance. I watch to see Murtagh grieve and bond with Claire over their mutual love for Jamie.

I also watch for Captain Jack Randall, who is one of the most sadistic and complicated villains I’ve ever had the pleasure to watch. Tobias Menzies has a lot to do with that; when Randall threatens to veer into cartoon evil-doing, he reigns it back in by sheer acting alone. I don’t know what Randall’s arc is in the books; I don’t plan on reading them for a long, long time. But after this episode, Randall should be dead, and Claire and Jamie should be free.

This episode ofÂ OutlanderÂ was near-perfect, except that the narrative that the episode was creating was diverted in order to keep Randall on the show. There is no reason that Black Jack should be alive. None. And what’s worse is that Claire was used as Black Jack’s escape route.

When Claire is standing over Jamie, holding that hammer, she has the advantage. Sure, she’s in trouble, but she has options; she can quickly hit the key in Jamie’s leg irons again, perhaps breaking it; she can hold her ground, and swing at Randall and Marley when they get too close. None of those options are particularly appealing, sure, but they are a sure sight better than her getting worked up and charging Randall.

It’s so infuriating. She just charges at him with that hammer, and she is easily caught. Why would she do that? Why? It’s so stupid, and so shortsighted. Claire has a temper, that is undeniable, but she would know that if she gets taken by Randall, Jamie is well and truly screwed.

Then, when Jamie agrees to let Randall rape him in exchange for Claire’s safety, Claire apparently can’t fight at all anymore. She has no injures, save for maybe a bruise on her face, and yet when Black Jack leans his greasyÂ head over the table, Claire does NOTHING. You’re telling me that Claire can’t reach across the table with her functioning little fingers and grab his hair and PULL HIM CLOSER?! You’re telling me that Jamie, with his good hand and arm and full of rage and adrenaline (not to mention he just killed a dude with one good hand and a sharp stick of wood), can’t grab Randall in a headlock and either a) snap his neck or b) hold him long enough for Claire to get a weapon and kill him?

I mean, come on. This episode turned Claire into a non-factor! I’m not saying she’s Ronda Rousey, but Jesus Christ, she’s been in this Scottish hellhole for months on months, and she hasn’t learned how to fight at all? She killed a dude with a little knife! She’s got the ability to do bad things to Randall! LET HER DO BAD THINGS TO RANDALL!

I loved nearly all of this episode; Jamie grabbing Randall by the throat and telling him that he is the broken one was legitimately awesome. But the narrative here was structured in such a way that there were many good opportunities to kill Randall, and none of them were taken for any other reason besides that Claire was crying on Jamie’s chest.

This episode opens with McQuarrie getting hung, and we watch him flail about as he slowly suffocates to death. We see Randall reveal himself to Jamie as a sexual sadist, as a man who cares naught for the victory, but for the conquest. All of these complex psychological themes that Jamie and Randall parry back and forth are almost wasted because Randall gets to do his worst for no reason at all.

I don’t know, man. I’m super salty about this right now. I loved like 90% of this episode so much, but I literally yelled at the television when Claire just wouldn’t do anything. She just cried and cried and cried. And then, when Randall is letting her go, she antagonizes him with the idea of her being a witch. She tells him the exact hour of his death (though of course we don’t get to know, which is strictly for plot reasons), and yet he still doesn’t kill her. Let’s be real: Randall doesn’t need any excuse to rape and kill Claire, and the fact that she might be a witch makes her an even bigger target for assault by Randall. If her plan was to escape and bring back the boys after Jamie, why would she push Randall and possibly get herself killed before she can carry out her plan?

This inconsistency with Claire isn’t going to fly. The series can’t use her as a plot device as they did in this episode, because it both cheapens her character and lays bare the transparent nature of whatÂ OutlanderÂ is trying to achieve. This show is so, so good, and they are having maybe the best first season of any show ever; they don’t need to do all these plot machinations to keep things going.

I hope it’s not because they feel beholden to the books. I feel as ifÂ Game Of ThronesÂ has laid the groundwork for moving away from source material to both further the message of the work and to improve on text itself. I just want them to be consistent with Claire’s character, because she is who I care about the most.

I’m still going to give this episode an 8/10, but that should speak volumes. Had they not done with Claire what they did, I think this might’ve turned out to be Outlander‘sÂ best episode.

God, I love this show. If I’m being harsh on them, it’s because they’ve earned my respect. I wouldn’t be up in their business if I didn’t thinkÂ OutlanderÂ had the potential that it did. I just want it to be good, that’s all.

The season finale is in two weeks. I hope it’s a good one.