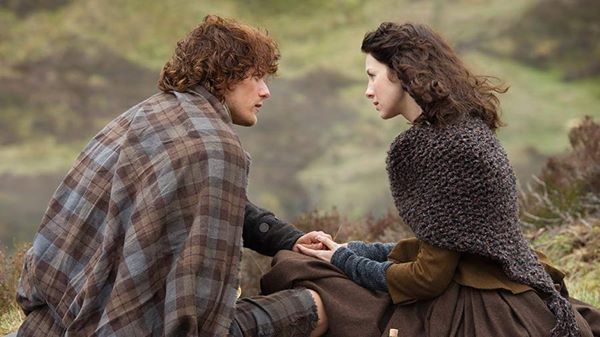 One of the best shows to debut this entire year has been Starz’s Outlander, and its popularityÂ has only continued to grow over the past two months since its premiere, making it become one of the most talked about series on television. Unfortunately for fans of the time-traveling romantic drama (and I myself am one of those fans), the midseason finale of Outlander airs this coming Saturday at 9 p.m. on Starz, and the final eight episodes of the show’s first season won’t air till sometime in the spring of 2015. However, to somewhat ease the pain of having to bid goodbye, at least for a little while, to Claire, Jamie, and the rest of the clan, we’ve got an official clip from the midseason finale, one that solely focuses on Jamie and Claire.

In the short video below, there appears to be some sort of trouble brewing (perhaps the clansmen have run into Black Jack or some other Redcoats), and Jamie must follow the rest of the men and leave Claire behind for a little while but he promises to be right back. “You shouldn’t make promises you can’t keep,” Claire tells him, but Jamie insists he will return.

After that, Jamie then asks Claire to promise that she’ll stay put, to “promise me, Claire. Swear you’ll be here when I get back.” An annoyed and worried-looking Claire takes a few seconds before answering him: “Fine. I promise.”

Whatever is going on in the scene seems to be very serious and tense, a far cry from the flirtatious and romantic scenes of last week’s “The Wedding,” and we’ll have to wait until Saturday’s episode to see what exactly forces Jamie and Claire to make these promises to each other and whether or not they’ll be able to keep them.