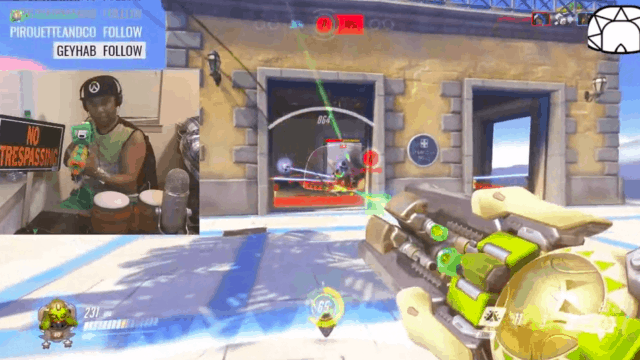 When I was younger, video game controllers were pretty simple.Â  With the Atari you had your joystick with the one button.Â  Nintendo came onto the scene with the directional pad and two buttons which seemed impossible the first time you used it.Â  The most complex controllers you would see were at the arcades where at most you’d have three buttons.Â Â  Then Genesis came out and with each passing year controllers got more and more complex.

Now we live in a day and age where you have to know at least 6 or 7 buttons and be able to multitask all on the same controller with only two hands.Â  I swear it takes more coordination than play 3 instruments at the same time.Â  But complexity of controllers is only the half of it.Â  People have developed a pretty funny penchant for controller mods as well.Â  It’s not good enough to use a regular controller.Â  Now you have to use objects like guns or even bongos to play games.Â  Which brings us to this guy.Â  According to Mashable:

Twitch streamer and YouTuber ATwerkingYoshi busted out the bongos, a Nerf gun, a yard sign on a stick and a Dance Dance Revolution dance pad to play the newest Overwatch hero Orisa, who has an automatic weapon for an arm and a hand drum-shaped ultimate ability. He posted a gif from his stream on Reddit Wednesday.

The Nerf gun is outfitted with a Wii controller for aiming while the trigger shoots Orisa’s gun. Meanwhile hitting the bongos will trigger two of Orisa’s abilities, Protective Barrier and Fortify. Orisa’s third ability Halt! is triggered by moving the “No Trespassing” sign. Very appropriate.