Home
TV News
Ozark is Solid, But Come on, It’s No Breaking Bad 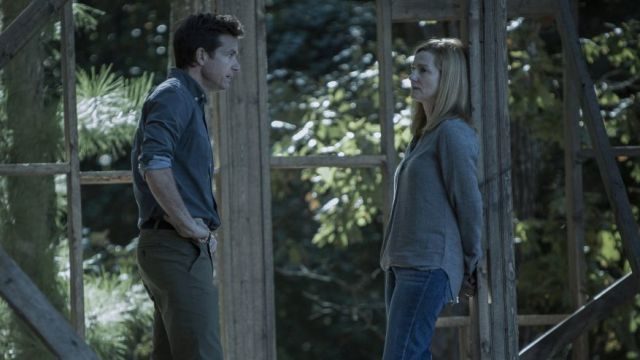 So far Ozark is a great show. It’s got plenty of suspense, the dynamic between the family members is great, and the feeling that people in the area just don’t like the newcomers is even better. But when you compare it to Breaking Bad that’s stretching the line just a bit. It’s a sound and solid show, but Breaking Bad was legendary in its own time and Ozark isn’t ready for this kind of comparison just yet. Give it more than one season to see how things go and then we’ll talk about how it might compare. Until then however it’s another show that’s experiencing great success and could possibly go somewhere.

So what other reasons are there for refraining from this kind of comparison?

Ozark is living up to its own hype but it still only has one season to its name.

To get the kind of credit needed to compare to other hit shows a program really needs to be able to run into the second season with the same kind of success. Â Right now it’s a little too soon to be talking about a season 2 premiere and whether or not it will be any good since season 1 was just released not that long ago. The ten-episode season has ended with what could be a cliffhanger if there was any chance that it wasn’t coming back, but let’s be honest, we’ll be seeing a season 2. The show is thus far very solid and has covered its bases quite well so there’s no sense in thinking it might not be renewed.

The Marty and Wendy connection is going the same way as Walter and Skyler, but with notable differences.

Do any of you remember what it was like in the beginning when Walter really started getting down to business? He was uncertain, unsure, and not at all confident that he could pull it off. Skyler was almost too petrified to do anything at one point, but she wasn’t the sobbing mess that Wendy is. Also, Â Skyler didn’t initially cheat on Walt, whereas Wendy did in the first episode. The main difference between Walter and Marty, besides their jobs, is that Walter is a nervous wreck for much of the first season, whereas Marty is adjusting fairly well despite the obvious tension.

The social situation is way different between the shows.

In Breaking Bad Walter and Skyler have a limited network of friends and family to fall back on if needed. Marty and Â Wendy have essentially no one, and they won’t bother counting on anyone for the simple reason that Del would likely threaten to kill them if he knew about them. The less collateral damage the better seems to be the idea, and Marty, for all that he’s doing bad, won’t knowingly jeopardize another human being he’s close to if he can help it. Â Walt cares about his family and friends, but that seems to be all the more reason to distance himself from them. Marty brings them into it full bore because to do any less wouldn’t alleviate the risk.

There are a lot of other reasons why Ozark shouldn’t be compared to Breaking Bad at this point, but one of the most important is that it just got started. Let it gain some ground before making any kind of comparison.