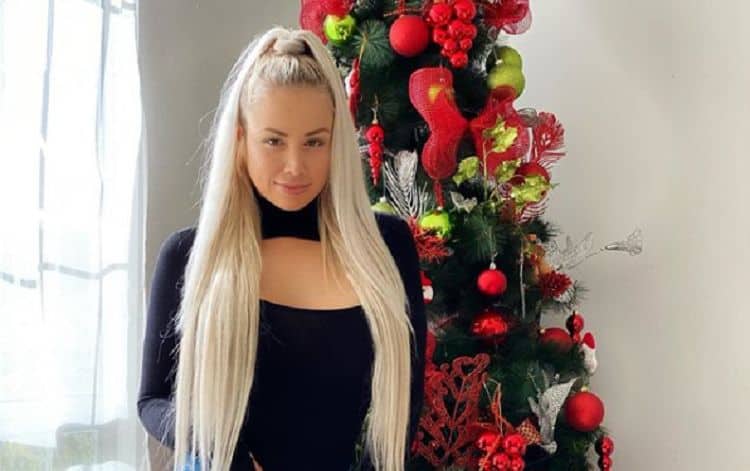 Having done a ’10 Things’ list on Russ Mayfield, we thought it only appropriate that we cover his wife, Paola, as well. After all, there are many who are likely just as interested in her and her background as Russ’s, maybe even more. The beautiful blond Columbian has garnered much attention from the public since she and husband Russ appeared on ’90 Day Fiance’; so much, in fact, that in some households she is a name that is commonly mentioned at the dinner table.

So, who is Paola? Besides coming from Columbia, what does she do, and what types of things does she enjoy? What about her parents, and does she have brothers or sisters, or maybe both? Well, folks, that’s why we’re here…to answer all these questions and more. The goal is that by the time you’re done reading this most, if not all, your questions will be answered. Perhaps you’ll find that you too are a fan of Paola Mayfield’s, if you weren’t already.

Even if you didn’t tune in to a single episode of ’90 Day Fiance’, don’t stop reading! We think you’ll find Paola to be more than a piece of eye candy, and you may be surprised at how much more. Settle in and enjoy discovering a woman who made it to America to find a husband she loves and abundant happiness. Read on…

Here are 10 things you might not know about Paola Mayfield

Born on May 14, 1987 in Bucaramango, Colombia, Paola was interested in modeling from a very young age. She got her elementary and secondary education in the place she was raised, but afterward she enrolled at Colegio Sabio Caldas for her college studies. It is unclear what she majored in there. The names of her parents, and whether or not she has siblings, is unknown at the current time,

As we mentioned, Paola furthered her education at Colombia’s Colegio Sabio Caldas, but she didn’t stop there. She also completed a course in personal training at Atlanta, Georgia’s Body Design University, and she studied modeling at John Casablancos Modeling and Career Center. She has definitely taken the necessary steps to prepare herself for the furthering of her chosen career path.

Once again, Paola is a model, personal trainer, and seller of a variety of items, which she moves over her social media accounts. The items she sells include teas, fertility treatments, CBD gummies, and much more. However, modeling is her primary career, even after the gig she had with her husband on ’90 Day Fiance’. Both modeling and the reality show have played a part in landing other roles for her in movies, and they have also done an incredible job of building her fan base and bringing more publicity to her, which is exactly what she needs in the fields she has chosen.

Yes, Paola sells goods using her social media accounts, as many do. But she is also very active in all the expected ways as well. She loves to share posts about her life, her husband, and her child, as well as posts and pics relating to her career. Fans can find her on Instagram under @paola_mayfield, where she has more than 770k followers, and she also has a page there under @superpaofitteam, which relates to her fitness endeavors; that page has nearly 60k followers. Find her on Twitter under @paolamayfield, and look her up on Facebook under her official account, Paola Mayfield, which has 55k likes.

While her husband does very well for the entire family, Paola isn’t doing too badly herself. In fact, when he was in between jobs at one point, it was her own professional undertakings which took care of them. Between her appearances on ’90 Day Fiance’, her modeling, personal training, and her Internet sales, is Paola is said to have an approximate net worth of $450,000, according to Heavy.

According to the beautiful model, she loves her husband very much. Of course, they have had their disagreements. There was his dislike of her modeling professionally, which he stated was due to some of the jobs she got revealing too much. He also didn’t approve of the whole breastfeeding thing on ’90 Day Fiance’. But Paola is feisty, and has absolutely no problem telling him exactly what she thinks and doing what she has to do to move forward. However, his opinions and their petty spats have done nothing to change her love for him.

According to People Magazine, she was hoping for a Christmas baby, but Axel was born on New Years’ day instead. She did go on to say that his birth was ‘an amazing way to start a new year’. She also said, in so many words, that she was too focused on her labor to pay attention to any festivities going on around her. Paola added that giving birth was difficult, but it was well worth the experience. When it was all said and done, she stated that she was ready to begin the brand new adventure of being a mother, and that she wanted to be the best one she could for her son.

Born on May 14, Paola is a Taurus, of course. Taurus women are organized, ambitious, and very driven in taking the steps necessary to make their dreams come true. They are often full of compassion, but won’t hesitate to tell someone the truth if it will help them, regardless of the fact that their feelings may be hurt. They are mostly generous and kind. Also, Taurus children tend to be very responsible with money, which is likely due to the fact that they are logical thinkers and users of their common sense. Paola was also born in 1987, which means she was born in the Year of the Rabbit. Rabbit children can be very loving and tender, and they tend to have much hope and faith when it comes to the future. They seem to optimists mostly, even when the going gets really rough, and they are not above doing whatever it takes to keep the important relationships going in their lives, even when it seems they may be falling completely apart.

According to Cheatsheet, Paola got quite a bit of flack for breastfeeding her son on the show, and both fans and co-stars alike had a lot to say about it. She also refused to change the way she chose to dress, which garnered nasty comments about her as a person. But she stuck to her guns on all issues, saying she didn’t feel the need to change who she was as a person because of being a mother or what others thought. To her, the show in general was fine, and even good for her career, and she didn’t allow the opinions around her to sway her one little bit.

The first thing that the model/television star has made very clear regarding her future s that she doesn’t plan to have any more children, much to husband Russ’s chagrin. She will focus on fitness to keep her in top shape, which will in turn move her modeling career along on a more steady speed. To get pregnant again at this stage of her life might hinder her career plans. As for returning for any ’90 Day Fiance’ spinoffs, we think she will, because keeping yourself in the public eye in her line of work is important indeed.

In our opinion, Russ and Paola Mayfield are a great match. They seem willing to do what it takes to keep their marriage alive, and they both compromise for the good of the other. These are the things that make a successful union, after all. As for their son, he is a perfect addition to their little family, and we’re sure he’ll be spoiled as an only child. So, good luck to them both, and may they succeed and continue to find happiness and contentment together.