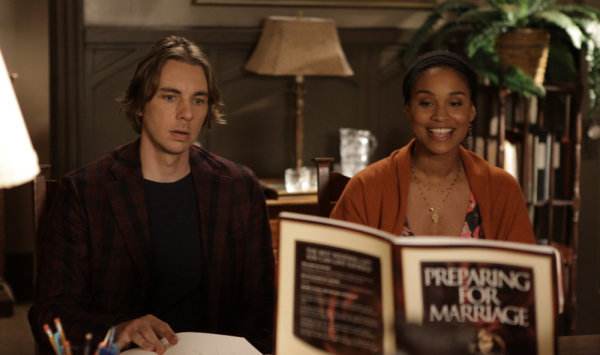 A fractured home is a restless home and boy are the three homes explored in Parenthood restless in ‘Just Go Home’. Amidst two tremendous fights and some pancake sandwiches, we get the return of a wayward daughter, the first steps toward reconciliation in a single parent household, and the first tears showing in a promising new relationship.

Sarah and Crosby both shone tonight because the two most laidback Braverman siblings had their respective cages rattled a little bit and their reactions were heartbreaking to say the least. That’s something that I really respect about Parenthood, that it never lets a character get too content in a certain behavior pattern before trying to shake things up. Sarah’s ex-husband Seth, played beautifully by guest star John Corbett, blows into town with his band and it really throws her for a loop; not only does she have to deal with Drew’s excitement at reconnecting and Amber’s hurt feelings (all portrayed in a raw, surprisingly touching free-for-all fight about going to Seth’s concert), but Sarah has to corral her own mixed feelings on the father of her children. Corbett’s character had the potential to be a big ol’stereotype, but Seth is part laidback charmer and part wounded soul. Whether it was seeing Corbett nearly breakdown when confronted by Sarah about their past or express pure joy at his son following his band on their website, I just liked having Corbett on my screen and hope he gets more time to win Amber over.

Crosby had the opposite problem tonight, as what home he had finally found with Jasmine and Jabbar was more or less snatched away from him. The two had been having some problems bubble to the surface in recent weeks, as Jasmine tended to take after her mother and controlled every move the family made whether Crosby liked it or not. After seeing that they aren’t as in sync with one another as they thought after a forced meeting with Jasmine’s mom’s minister (who was half psychologist, half mirror), Crosby couldn’t take it anymore and let it all out. Granted, both sides had valid points (Jasmine won’t let him make a decision vs. Crosby can’t make a decision and Jasmine has to do it if the family was to survive), but the way it was initiated was clumsy and it was one of those ugly fights where you say whatever you can think of to try to hurt the other person. Crosby retreated to the cramped, colorful, empty attic (I believe he used to live there?), a sign that the safety of squalor can be more appealing than the nicest of houses.

The Haddie/Alex storyline that had been driving the show for some time finally ended tonight and it went out a lot quieter than I figured. Having Haddie home again makes sense and adds another dimension to the Adam/Kristina household, but I just hope that we’re not in for a lather, rinse, repeat situation now that her relationship with Alex is out in the open. She seemed a little off put by the restrictions that her parents put on their relationship (curfew, 2 dates a week, no time at his apartment, school always comes first), so that leads me to believe that Haddie’ll try to test her limits again and we may be in for more power struggles.

The idea of home and what constitutes family is the nucleus of Parenthood and “Just Go Home” presents the idea that maybe what you know as home really is where you belong, try as hard as you can to fight it.