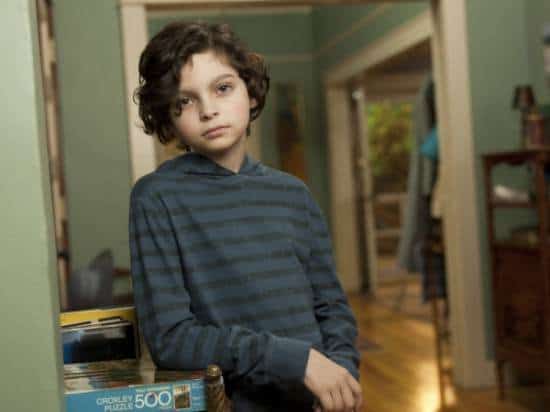 As yet another stellar episode of Parenthood was winding down, this quote came spilling out of someone’s mouth. I quickly wrote it down because the intent behind the line was quite romantic, but in looking back over my notes, it kind of sums the episode up nice and succinctly. Try as they might, Team Braverman, stacked with perfectionists as they are, got to explore second chances tonight in what I consider to be the best episode so far.

The most obvious second chance was given to Adam and Kristina who kind of botched the first sit down they had with Max regarding his Asperger’s. She cried, he was sullen and referred to it as a disability; not the most ideal way of informing your son about something so life changing, right? I didn’t get the feeling that Max really got it fully the first time, so there wasn’t as much harm done, especially since his parents regrouped, went to therapy, and got a concrete plan of how to approach it. As frustrating and wretched as Adam was this episode, especially when dealing with the therapist and the confrontation with his parents over Crosby, it was all worth it in the end when he realized he was wrong and decided to try things another way. Additionally, the scene where they calmly lay out the positives and negatives of having Asperger’s to Max, who’d really just rather be playing Bug War (wouldn’t we all?), was incredibly touching and built nicely off of the episode with Michael Emerson.

There was rekindling of sorts between Sarah and Mr. Cyr, as Jason Ritter took a breather from trying to save the world to read a play written by our favorite barmom. Lauren Graham could have chemistry with a houseplant, so it’s not surprisingly that their scenes were full of butterflies, but I have to admit, finding out that Sarah’s play was fantastic made me cry even more than Sarah did. To see someone who has been so directionless and lost find a toehold in something pretty legitimate was moving beyond belief, as well as the fact that Mr. Cyr mailed her a copy of ‘The Elements of Playwrighting’. I have to say, my tiny heart grew another 3 sizes on seeing such a loving gesture. Sarah may not have the big title of being a manager of the bar she’s tending (right idea, wrong place), but there’s even bigger things on the horizon if she can just stay with it. I find it really interesting that Sarah, a woman who has been defined by her relationships with men, has been kind of ‘shown the way’by some of her wayward ex flames. As beautiful as I find the vibe that Sarah and Mark have, I kind of want Sarah to just knuckle down and get into this playwrighting thing so she can have something of her own.

The other two siblings were mostly outliers in this episode, as their plots didn’t take up a whole lot of space, but they were engrossing nonetheless. While Julia and Joel turned down a weekday date for the first time in 6 years to comfort an obviously broken Jasmine (it’s nice to be able to sympathize with the girl because up until now, it’s been all defensive yelling and immaturity), Crosby is busy spiraling out of control. This is the second episode in a row where he’s been drinking by himself and now that he’s been arrested, there’s really only so much farther down the rabbit hole that he can go. It’s nice to see Zeek get a little more paternal that he has been, going as far as defending Crosby to Adam and bailing Cros out of jail for fighting on his boat. Like I mentioned last week, I hope that the Crosby-chases-after-Jasmine plot is dropped and they transition to co-parenting Jabbar through visitations and various events. There are only so many times I can see Crosby be kicked around and judged, plus there’s a whole heap of drama to be had from whose-weekend-is-it discussions to who disciplines how.

Second chances can be tricky. They can either give you another go around to make things right, they can show you what you’re missing (or what you thought you were but really aren’t), or they can just show up at the wrong time. Regardless, the Braverman family did the only they know how to do: survive and as long as the stories continue to be this good, let’s hope they stay in tact for a long time to come.

Grade: A
Episode MVP: Everybody (hey, this is my review, I can do that)
MIA: Drew and Amber
Other Favorite Bits: “It’s not often I find women kneeling outside my door.”, Sarah being spooked by Mr. Cyr, “I thought you had to sleep all day like a bat.”, “I say this out of love, but you’ve gone rogue.”

Note: There will be no new episodes of Parenthood for the next two weeks at least. Trust me, I’m pretty down about this, too.