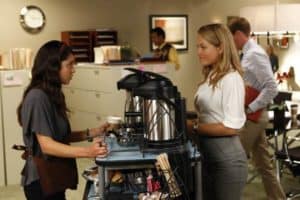 Like her or not, the heart and soul of Parenthood is Sarah Braverman. With a goofy sense of humor masking an emotionally fragile inside that doesn’t get to come out that often, Sarah’s the most complex character in a show full of complex characters, a single mom trying to find her place in the world and someone to come home to at night. She’s got the spirit of an artist and a massive heart that sometimes gets her in trouble, but she possesses some pretty sturdy emotional walls that take time to come a-tumblin’ down.

That’s what made “Hey, If You’re Not Using That Baby” such a satisfying hour of television, as Sarah’s blossoming relationship with Mark was the main focus and it didn’t suffer a let down from the romantic premiere. You’d think that after two years apart, minus Mark’s brief cameo toward the end of last season, that the chemistry between the two would take some time to really get going, but it’s as if they’ve never been apart and it’s extremely charming to witness. Sarah and Mark simply go well together, their giggly pillow talk and looks that oozed thousands of words able to send the heart of even the most jaded fluttering. He’s intelligent and mature enough for her, she’s quirky and interesting enough for him; they had to make it official tonight, right?

I was glad that they didn’t stretch Sarah’s indecisiveness over whether to damn the torpedoes into several episodes, a possible positive side effect of the reduced episode order. No matter, as it made the sublime scene in the car where Mark tells her that “this side of the car is in” that much more painful and the ending that much more emotional when Sarah decides to do something to make herself happy for once. (With the blessing of her daughter, of course.) I don’t cry that much during Parenthood, but those are the two parts that made me pretty much lose it and I can say that I’m looking forward to the notorious self-sabotaging bad boy magnet finally breaking the habit.

The rest of the Braverman family was busy taking leaps of their own into previously unknown territory. Thankfully, after the mostly set-up premiere, there was plot development for pretty much everyone tonight and the episode shone as a result. You kind of figured everything that happened was going to happen, from Adam finally agreeing to be a part of Crosby’s studio to Zoe refusing Julia’s advances at her unborn baby to Kristina worrying herself sick over Max, but it was all executed so well that it was a joy to watch. Kristina’s storyline, in particular, surprised me, as I assumed that awful teacher + Max having a hard time adjusting to mainstream school + pregnancy hormones would equal a major Defcon 5 on tonight’s Parentood, but she held it together quite well. Of course, there was a touching moment where she stopped trying to be everything to everybody and showed vulnerability, but for the most part, Kristina was simply focused on making mainstream school an enjoyable experience for her son. When you realize that poor Max, who was almost immediately pegged as a “freak” for his pushiness in class and his social awkwardness, finally found someone to talk to, there was a sense of relief that had to wash over you.

And of course, I cried a little.

You could argue that Max’s friendship with Jabbar’s friends is his most significant development on the show to date. Sure, finding out he has Asperger’s and beginning to understand it is one thing, but Max has been in a bubble with his extremely doting parents and tonight’s episode fulfilled the promise that “Amazing Andy” brought last season. This shows that he’s got a chance to have a relatively normal life and make social connections with people; yes, they were young kids with whom he shared an interest and who let him rattle off facts, but it’s a good starting point simply learning how to be comfortable talking to people.

If only we could have seen Adam’s reaction, as Max’s dad has had the roughest time accepting his son’s disorder of all the Braverman family.

Season three of Parenthood seems to be focused on knowing when to finally take a leap of faith after constantly talking yourself down. Whether it be Sarah’s new love, Adam’s new business, or Crosby’s renewed sense of passion, the Braverman siblings have had enough of their humdrum lives and in “Hey, If You’re Not Using That Baby”, we get to see the family trying to make positive changes. Instead of a lot of sighing and pensive looks into the great wide open, all four siblings were thrown into the action and each made progress toward becoming the person they want to be. Parenthood may be known for being a dialog heavy show where the characters wear their hearts on their vocabularies, but in tonight’s episode, they walked the walk after seasons of talking the talk.