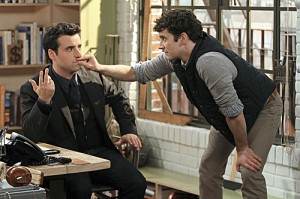 Partners is based on the lives of creators David Kohan and Max Mutchnick. Urie stars as Louis and David Krumholtz plays Joe, two life-long best friends and business partners whose “bromance” is tested when one of them is engaged to be married.

Of course, Louis and Joe are opposites: Joe is an rational architect, while Louis is spontaneous and dramatic. Both are currently in relationships: Joe is dating sophisticated jewelry designer Ali (Sophia Bush), while Louis is dating vegan nurse Wyatt (Brandon Routh). But when Joe becomes engaged to Ali, it’s hard to determine the repercussions of this new development on their friendship.

Watch a featurette with clips for Partners below, which will be airing on Monday nights at 8:30 p.m. beginning in the fall.