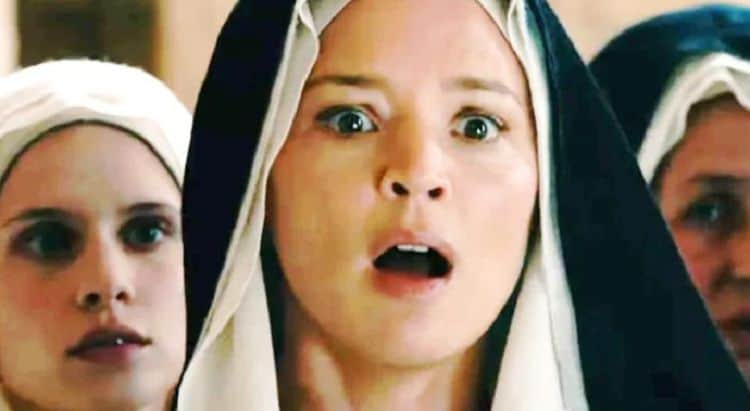 Benedetta feels as though it’s going to cause a bit of controversy to be honest, even if there are plenty of people that are going to go online and search as to whether a nun ever had a love affair with another woman. One can imagine that a few individuals of the LGBTQ+ community are going to be either laughing or pumping their fists in victory towards those that might claim that no such thing ever happened. In other words, Paul Verhoeven is back at it with another movie that’s bound to be talked about by a lot of people in very different ways since yes, a nun satisfying her urges with another nun does sound like something that people might take offense to. Hey, if a person doesn’t like what they’re seeing, they have the freedom to look away, and while it might not be the type of movie that a lot of people are going to think of as worthwhile, it feels as though a lot of those same people are going to watch the movie simply out of curiosity since some people will reason that watching the movie will allow them to bring a better argument to the table when discussing whether it was really necessary to make the movie or not, and some might just want to see what all the fuss will be about. Personally, since this isn’t my type of movie, I might read the synopsis and call it good and then be on my merry way, content to let those that want to watch the movie and enjoy it do so without any unnecessary commentary. See how easy that is? Imagine how orderly social media might be if more people took that kind of cue, finding the necessity to speak up when it’s something important and worth talking about, rather than vilifying a movie or people or situations that they have absolutely no control over.

Seriously, it does feel as though Benedetta might make people gasp and look away, but apart from that it could be an interesting tale among the many other stories that have been told throughout the years, since like it or not, it’s one more story that should probably be told. Not agreeing with a story is all well and good, but casting doubt and aspersions at a story is kind of useless unless the express purpose of the said story is to direct and manipulate others into acting in a manner that’s contrary to the well-being of others. It might actually shine a floodlight on something that people have been writing about for a while as well since the priesthood has been hit hard over the years with jokes, rumors, and allegations of sexual acts that have taken place within the church. In this instance, it might actually be cast into a new light, but hopefully an honest one, since already this looks more like a love story than any indication of abuse or wrongdoing. That would kind of figure when it comes to the differences between men and women, sadly, but if anything, the hope is that this movie will be even-handed in its telling and that Verhoeven will find a way to get people to react in an honest way by showing an honest movie. If anyone’s confused by this, then let’s just say this; too many movies tend to take true stories and warp them into what the director wants to show, not what has really happened throughout history.

With this being a biographical drama it feels as though Verhoeven should set his ego aside and tell the story as it was documented, not necessarily as he would like to do. It sounds a bit contrary, or rather a lot contrary, but it does feel as though a great director should know when to put their ego aside and help a story unfold, rather than direct it and force it into shape with their will and desire. In many movies, these qualities are great since they end up creating tales that are inspired and can pump the audience up while delivering them a great story. But in a biographical piece it’s best to stick to the truth, as much as possible anyway, and tell the story, not create it. If Verhoeven has managed to do this then it might be that his efforts will be rewarded with a favorable review, but if the movie still gets good reviews after being seen as a sensationalist piece, it’ll be even more obvious that critics and fans are more about flash and the pomp that can be added to a story, and less about the story itself. The teaser doesn’t reveal much, but it’s likely that people are going to be talking about this movie once it’s released this coming July.