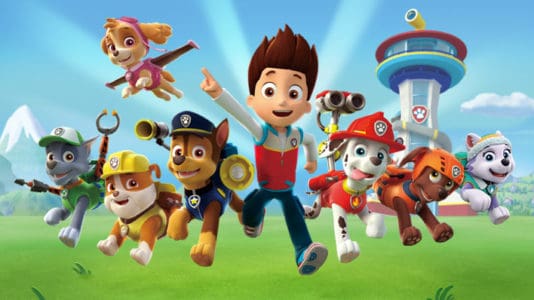 Kim Kardashian is just one of several actors that will be taking a role in the upcoming Paw Patrol movie that will be coming as of August 2021 to theaters, assuming that things are open at that time. The hope of course is that things will start moving back towards a semblance of normalcy at that point, as many people would love to see this happen so that theaters can reopen and life can get back to the way it was, in some form at least. Some might wonder why a Paw Patrol movie hasn’t come about as of yet, but the cartoon has been enjoying a great deal of success since it arrived in 2013, and the only real danger that it’s faced was earlier this year when people were ready to petition for the cancellation of the show due to the presence of Chase, the police dog that serves on the team and is a very influential part of the team that the other pups tend to listen to. With the continual anti-police sentiment in the country, it was a worry that the show might have been taken off the air at some point, but at this time things are still progressing without any further worries.

The part that each actor will be taking isn’t known as of yet, but people are bound to come up with their own theories before the trailers start to emerge. The possibility that many kids will be chomping at the bit to get to see the movie feels likely if they find out about it, but otherwise, it feels as though a lot of kids might be just as happy to see it at home if that’s what it comes to. Many people are already theorizing just what the movie scene might look like in the coming year since so many blockbusters have already been rescheduled once or twice. There are still movies coming this December that people are hoping will help to turn things around, but the general feeling that no one is willing to risk their health to see a new movie is bound to hold until there’s a definitive answer to the pandemic. The safety protocols that are in place and any others that might be included in the months to come are likely to get people back in the mood to visit the theater, but at the moment it’s kind of a wonder why drive-in movie theaters haven’t been looked at by the big studios since they’re still operating and they do tend to allow for social distancing in a big way.

One might think with added technology and an upgrade to existing theaters and money put into making other outdoor theaters that it might be a good way to revive the movie industry, especially since beggars won’t be able to be choosers for that much longer unless a miracle decides to happen. It’s very true that families that have covered vehicles that can accommodate greater numbers have a decided advantage, especially in the coming winter months. But it’s also likely that drive-in theaters won’t be as popular as the weather begins to turn. But again, if the studios are really looking to increase their revenue from the abysmal summer that they’ve had, drive-in theaters would be the way to go. The obvious downside though is that people might be able to see the movie without actually paying since unless there are natural barriers to anyone just happening by, such as trees or hills that would hide the screen from those that would seek to take advantage, it’s likely that a lot of revenue could still be lost. Waiting on things to change for the better hasn’t gone over so well at this point though, and it’s fair to say that if things keep going this way there might not be a lot of theaters that can afford to open up come next spring or summer. It’s the hope of many people that this won’t be the case, that they’ll be able to put 2020 and the pandemic in the rearview once the new year comes, but as many of us that have been around for a while happen to know, the old year’s woes don’t just disappear unless something’s done to move forward.

Paw Patrol: The Movie, will no doubt reach as many viewers as it can, even if Disney has to bite the bullet and put it on Disney+ for a premium charge as it did with Mulan, but right now, betting on the theaters opening isn’t inspiring a lot of confidence in people since the last several months have been hard for a lot of folks. With so many streaming channels and options for entertainment, one would think that losing the theater experience would be a pittance, but obviously, that’s not the case.