Home
Movies
Peeps Are Officially Getting Their Own Animated Movie 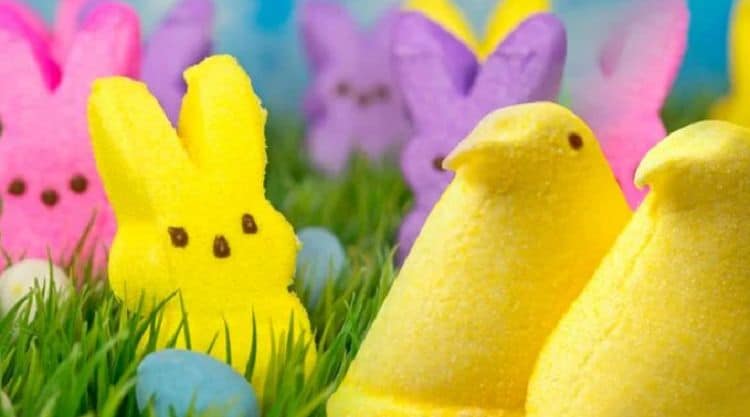 Okay, someone had to be on a sugar high or something when coming up with this idea since we’ve seen an emoji movie come out, as well as the drug-induced Sausage Party, but a Peeps movie is really pushing things, and asking to push even more since the idea that a movie being made based on the adventures of anthropomorphized marshmallow bunnies and chicks is something that will somehow, someway, be approved of by more than a few people. There are likely people out there that are excited to see this for various reasons, but asking why is bound to be seen as a less than a popular question since, well, people want things that are inane and out there in a way that challenges conventional thought. Usually that’s a rather positive notion since questioning everything and trying the extra mile to challenge the status quo on what’s tasteful, tactful, and sensible isn’t such a big deal. But marshmallow chicks and bunnies going on an adventure that will probably feature Pepsi products as well is something that’s kind of hard to get behind in a few ways. Speaking of it as an idea it’s not the worst thing to ever come along, but it’s still fairly ridiculous given the nature of the main characters.

Plenty of people are going to get behind this thanks to the unconventional nature of it, and because there are people out there that love Peeps since they’re almost pure sugar with a few other ingredients that come together to create a squishy, spongey treat that has been around for decades and are sold in abundance during Easter. Peeps have been insinuated into other holidays and have been given a wide variety of flavors, so it’s easy to assume that this might be put into the movie since otherwise seeing Easter Peeps might be kind of boring. While the idea in show business is to be inclusive of all ideas and give every story some validity, there are those that, like this attempt, are more than enough to test the limits of that idea since it feels too likely that without a strong enough story that the whole thing is bound to fall apart without much prompting. At the moment it doesn’t appear that much is known about the movie other than the fact that the Peeps will be seeking to attend a large gathering of sorts and likely facing down many perils along the way. But even this is enough to make a lot of people roll their eyes and groan since the general idea is that making a movie about talking food isn’t horrible, but it’s definitely enough to make people think twice about what they eat. With Peeps, people should probably be doing that anyway lest they start flirting with diabetes after a single box.

That might sound unkind and even a little judgmental, but to be fair, Peeps are a seriously acquired taste, and it does feel as though the movie might be as well. This is one of the few times that I’ll gladly stand by my words even if the movie turns out to be a success since it will be a mark of how our society is willing to accept just about anything in lieu of something that’s worth making a movie about. The thing is that it was seen with the Emoji Movie that this isn’t always the wisest idea, and despite the success of Sausage Party, which proves that people will accept anything as long as they can forget it soon after, this kind of idea is something that’s usually there and then gone in a very short amount of time for various reasons. It’s very easy to believe that the contents of the Peeps movie will be a lot more wholesome than Sausage Party if only because the company has a reputation to uphold and it’s not bound to be written by Seth Rogen and Evan Goldberg. It’s too early to say much about it, but the feeling from my end is that this is going to be one of the more ridiculous movies of the decade when it comes out, largely because it’s a movie about candy that comes to life, a thought that is interesting but not quite enough to make a full feature about it. That’s one opinion, and it’s one that will remain firmly locked in place until something comes along to change it.

As a writer and a novelist, it’s easy to say that every story has some validity and has enough meaning to it that it should be told. But until the Peeps movie comes along and is shown to be a good idea then the fact is that ideas should be embraced, but some ideas should be left where they sit.