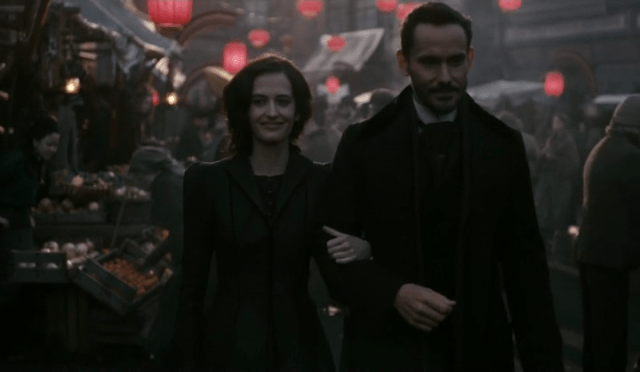 It has happened people. Penny Dreadful has surpassed the likes of Game of Thrones in terms of on-screen gore and violence. This episode was quite bloody. You know what I’m talking about. That literal bloodbath for one. And of course other things include Renfield eating a bug, the vampires eating another vampire and of course Hecate casually slitting people’s throats. But the award for most blood ever seen on TV goes to Lily, Dorian and Justine who apparently has a name now. God, if you ever though a show couldn’t get bloodier than Game of Thrones, you were wrong. This show is now the undisputed master of gore.

But enough about gore and violence. Most people, including me don’t care about that. So, I’m just gonna talk about what Penny Dreadful has to offer apart from that. This time around Ethan’s apache dream was short which was an improvement because last episode’s dream sequence felt prolonged. Hecate’s plans have now been revealed though. Ethan is the wolf of God and she wants him to embrace his darker wolf side. I don’t know if doing that will permanently turn Ethan into a wolf or not, but I’m counting on it. Sir Malcolm and Kaetenay though, are alarmingly close. I’m pretty sure there’s a reunion in the next episode. But, I’m afraid it won’t be cuddly hugs and ‘it’s been too longs’. Apparently, Kaetenay wants to kill Ethan if he can’t be saved.

Which brings me to the biggest reveal in this episode. Not the one at the end but one which was subtly referred to: the apocalyptic world-ending event that will befall the world. It’s literally the first hint at the calamity of the season. Ethan is supposed to play a huge part in it. But, I’ll be damned if Vanessa doesn’t have a part to play in it. And, naturally Dracula is involved.

But there is someone who’s definitely not involved, at least this time around: Jon Claire. His storyline felt the most detached from the other’s. Everyone’s looking at the future while he’s searching for his past. He finds his family and that’s about it. Of course, he has a major part to play in the episodes to come. At least that’s what the reveal is supposed to make us think.

Inspector Rusk finds the bodies of the people Ethan killed. Horrified, of course. But he’s sure that Ethan isn’t a cold-blooded killer. Speaking of, alot of people seem to be misjudging Ethan this week, including his Apache father. Well, even though Rusk carries no guns, the Americans do. But they’re like the stormtroopers from Star Wars. Despite having the element of surprise, none of them manage to shoot Ethan or Hecate. Verdict: Americans are terrible shots.

Lily’s story involves her training Justine to become some sort of Man-killer. I know feminazi is a horrible thing to say to someone but Lily’s talk of mastery fulfills the meaning of the term. Justine kills her first man too and they bathe in his blood. You know, I have heard the phrase ‘bathe in the blood of our enemies’ so many times, yet I’ve never seen someone do it. Lily is crossing some serious lines here and I can see why Victor will go to any lengths to pacify her. Now Victor wants to combine his and Dr. Jekyll’s knowledge to make the experiment succeed. I’m sure this time around, it will. We also got to see more of Mr. Hyde manifest.

And Vanessa’s sessions with Dr. Seward continue. She doesn’t believe Vanessa until she grabs her and shows her some mojo by accurately guessing her past life. Just a flicker of belief there. After the session, she goes on another date with Seward, now confirmed as Dracula. I feel like I’m the only one enjoying these dates. Even though Vanessa’s the devil’s bride and Sweet is Dracula, it’s still great to watch. Eva Green and Christian Carmago have excellent chemistry. It’s a shame their relationship is doomed.

And it’s not only Jon Clare who uncovers secrets. Remember in season one, when Vanessa was admitted into an asylum? Well, that was Banning Clinic. There, she was held in a room where she met Dracula. But surprise, she also met Jon Clare there. It’s an excellent move. The Creature has felt irrelevant this season and doing this is pulling him right back into the fold.

All in all, this week’s Penny Dreadful was excellent. Three episodes in and the show’s not running out of surprises to throw our way. Ethan’s part in the story becomes more clear while we finally know what is to come in future episodes. Lily and Dorian enjoyed an excellent and gory storyline. While Jon Clare’s story fell flat, Vanessa’s date with Dr. Sweet and more Dracula scenes facilitated this episode.