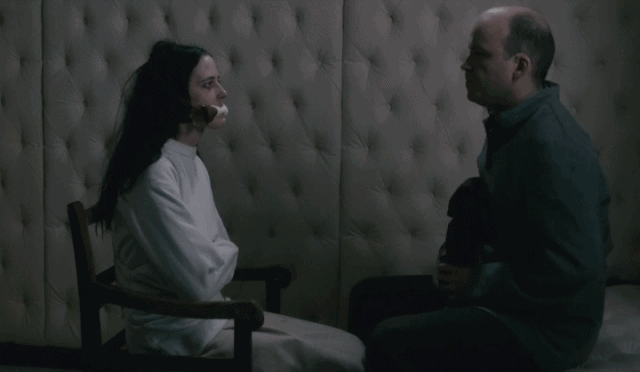 Damn, that episode was great. This episode of Penny Dreadful is unique in the way that it focuses on Vanessa and her relationship with The Creature before he was The Creature. It succeeds in the same ways that ‘Closer Than Sisters’ and ‘The Nightcomers’ succeed. These are the kind of episodes that set the pace for the entire season. And as far as pace-setting goes, ‘A Blade of Grass’ does a marvellous job. Last week, we saw Vanessa hypnotize herself to learn more about Dracula. What she didn’t know was that the orderly in the Banning Clinic was Jon Claire himself.

Continuing from there, Vanessa is lost in the white room. She cannot come back from her hypnosis trip until she finds the truths she came for. Until then, all she has for company are Dr. Seward, Jon Claire and of course the devil himself. And it’s not like The Creature and Vanessa hit it right off like the first time they met. Their relation is solely professional at first. All Jon Claire wants is for Vanessa to eat. When she doesn’t, he forces her to.

But along the way, their relationship turns into something much more. After a small disagreement and a physical altercation, Jon Claire starts opening himself up. Vanessa of course, won’t do the same. She prefers to be the one asking questions. “Is it day or night outside?” to which he replies “Whatever you want it to be”. I can’t really describe how it goes from there but you can actually see their bond go deeper.

I think the crew deserve a shoutout for some outstanding cinematography here. It’s not exactly an easy feat to shoot something in a single room. In fact, I would say that ‘A Blade of Grass’ has no right to be as good as it is. But that’s exactly how good it is. Another shoutout to Rory Kinnear and Eva Green for their excellent performances. The former has just given his best performance on the show to date. Maybe the performance of his career.

As for how the rest of this episode pans out, we get some references to past events. Seward mentions the cutwife, we see Vanessa obviously shaken by the therapies she undergoes which were shown to us in “Closer Than Sisters”. In fact, in many ways, this episode serves as a spiritual successor to the season 1 episode. This is what happened to Vanessa after she was tortured. And how she found solace in a simple orderly.

A place where this episode missteps is where the relationship between Vanessa and The Creature becomes romantic. That part was just pointless and we certainly could have done without it. I really hoped that the nature of their relationship was rooted deeply in humanity.

Like all episodes of Penny Dreadful, this one was quite dark as well. In fact, it’s certainly the darkest of the entire season. Both Dracula and The Devil appear in this. What’s more they appear with Jon Claire’s face which sort of doubles up the creep factor here. Dracula’s true motives are revealed here. Whereas the devil wants her soul, Dracula wants her flesh whatever that means. I think it means the same thing. Whereas Satan wants her for power, Dracula wants her for lust. It is also revealed that Dracula and Satan are sort of brothers.

What does Vanessa do when she finds Satan and Dracula in the same room? She prays of course. She rubs God right in their faces. Sort of shows off her faith to them. But during all this she’s learned two more things: that the master’s name is Dracula and that he can possess any one he wants. So it’s quite a huge possibility that Sweet is just a man possessed by Dracula.

How does all this impact future episodes? Well, Vanessa now knows more, that’s for certain. She knows what she’s up against. And finally she might have finally regained her faith which is saying something.

Penny Dreadful’s fourth episode is an outstanding one and definitely the best of Season 3 so far. It sets the pace for the entire season while portraying a humane relationship between Vanessa and The Orderly.