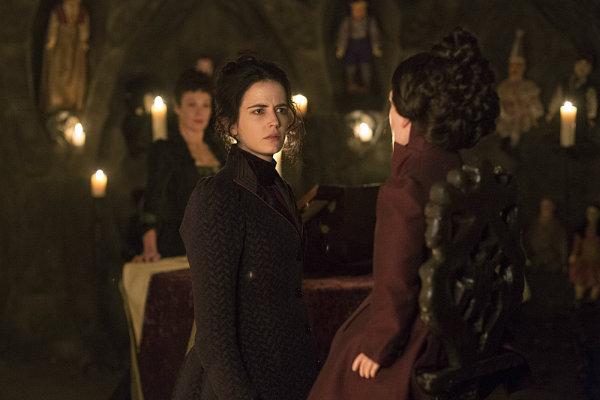 After hoping in last week’s review thatÂ Penny DreadfulÂ wouldn’t turn its season finale set piece into “Grand Guignol” 2.0, “And They Were Enemies” opens with a quick dispatch of its major season plot line, again rushing through a meticulously thought out premise with an unsatisfying, too-neat climax, in order to set up a number of interesting character stories for the next season. Unfortunately, every single one of these new paths diverge from the main world of Victorian London; and asÂ Penny DreadfulÂ ends with its main faction fractured, it’s not hard to wonder how the seriesÂ will be ableÂ to put itself back together next season.

From the beginning, “And They Were Enemies” suffers the same problems I’d hoped the show learned from in “Grand Guignol”; while it’s entertaining to throw a massive array of characters into one location for a dramatic, gun-filled spectacle of gothic imagery, “And They Were Enemies” reminds us once again how little room this leaves for satisfying personal moments, scenes that would deliver on the thematic suggestions conjured up through the season’s first nine episodes. With a few bullets and a quick hallucination into Vanessa’s ideal life, the immediate conflicts of the season are over; Victor and Malcolm are freed from their visions, and the group gathers Sembene’s body and goes back home.

This doesn’t mean the opening 20 minutes are without their charms; watching Vanessa talk to her own doll is wildly entertaining in ways onlyÂ Penny DreadfulÂ can deliver. There’s also no doubting the charm of seeing the moment the Vanessa/Ethan material has built towards this season, the moment the wolf man becomes the Hound of God, and refuses to viciously attack Vanessa, instead revealing his killing of Poole to be done out of defense. But push beyond those two individual moments, and the other stories of the season are dropped with dull thuds; Malcolm’s story simply ends, Victor ultimately becomes an ancillary character in his own story, and Lyle… goes home?

The only discernible reason for the quick disposal of the Nightcomers (well, most of them) is for all the machinations needed to plant the seeds for Season 3, all of which come across as abstract ideas that aren’t really worthy of their presence dominating the final episode of what’s been a terrific season otherwise. All of a sudden Dorian is a grinning, cackling spinster of evil? As fun as the image of him and Lily dancing around bloodied, the sudden shift in his character is as abrupt as Lily’s was a few episodes ago, cutting off her story (and in the process, Victor’s) at the knees to preview another Big Bad, repeating the show’s cycle of infatuation with teasing the audience.

Caliban’s story is another great example of this; in a story that hasn’t felt like much more than a diversion to keep him busy and depressed, the ending to his time imprisoned is another journey without an ending. He simply kills them all in increasingly brutal fashion (or so we can imagine, given what Lavinia did to him), and then heads off on a ship to fill his arctic destiny; there’s no closure to his story with Lily, no offering that anything he did this season held any true significance to his character, except reinforcing ideals well-established in the show’s first season. And the rest of the stories proceed in similar fashion: Ethan gets extradited (on a ship), Vanessa sits at home, Malcolm gets on a ship, and the sister whose name nobody remembers (her name is actually Hecate) burns down the castle, presumably to get on a floating device and head somewhere else to do evil things.

As exciting as all these possibilities are, they come in sacrifice of the many rewarding stories this season had to offer, cutting many narratives off at the knees in a confusing mix of climatic moments and heavy allusions to the future, imbalanced to the point “And They Were Enemies” feels more like an impasse than a finale – which would be fine, if the show hadn’t once again constructed a story that directly built to a climax it doesn’t exactly deliver on. So it’s with many grains of salt I watch the beautiful monsters ofÂ Penny DreadfulÂ sail away to their individual desolate shores; hopefully, when the show brings its exquisite, lyrical prose back in 2016, it will do so with a renewed sense of purpose, be it in unifying its characters once again or spending a season exploring a number of locales, perhaps giving critical attention and nuance to the individual journeys this finale so sorely needed. Victorian London may be hopeless, but that doesn’t meanÂ Penny DreadfulÂ is without hope after “And They Were Enemies.”