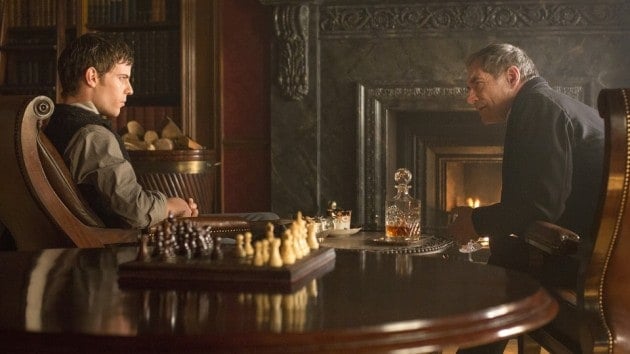 Penny DreadfulÂ is never concerned with its narrative pentameter; some episodes linger on a single location or character for the entirety of an hour, while others bounce haphazardly back and forth between its various London settings; either type of episode is privy to massive dramatic accelerations or pauses, and both come with their own benefits – and detriments, somethingÂ the everlasting duality ofÂ Penny Dreadful‘s evaluation of humanity would agree with. “Memento Mori” is the epitome of all ofÂ Penny Dreadful‘s various elements; frustratingly quick in some places, while lingering beautifully in others – and vice versa, a mix of fascinating, visually engrossing material that comes together quite neatly in many places, and in others, fray apart in disconcerting fashion.

The strengths and weaknesses of the episode – and the series – really stem from the same place. Penny Dreadful‘s setting allows it unprecedented levels of intrigue; every shadow in the world is given texture, be it those littering the alleyways, or those casting themselves against the faces and souls of our tortured, supernatural characters (again, more intrigue). AndÂ Penny DreadfulÂ uses the familiar roots of those engrossing traditional horror tales to tell poignant stories about humanity, about identity, about understanding the deepest flaws within ourselves, and trying to come to peace with them. These are the stories of grounded, much more realistic dramas, enhanced by the exhilarating style and attention to detail shown in every scene – and yet, sometimes those same tools and skill sets work against the show.

Take Lily Frankenstein’s story, for example: fresh off killing a man, she spends the episode taking back control of who she was, is, and wants to be. When “Memento Mori” pauses to explore this journey, it’s captivating television: the twists and turns her conversation with “Mr. Clare” explode on-screen, even when that terrible Irish accent briefly re-emerges. We can feel her clawing at her own humanity, and coming up short: it gives voice to characters seen and unseen in this episode, from Malcolm’s fight for his own soul to Ethan’s failed attempts to keep the beast inside himself tamed. More so, it gives Lily’s character the kind of arc it’s missed while she’s been courted by the ever-confounding Dorian (who murders poor Angelique after she discovers his infamous secret portrait); her journey back to the world of the living takes on a new meaning when she accesses the traumas of her past life, rejecting her humanity (and in particular, its masculine tendencies) and embracing her newfound position as a sexy, undead bringer of (assumed) justice.

However, compared to other stories, like Ethan or Vanessa’s, Lily gets from point A to point B in a matter of minutes – literally in the same exact scene, which renders a lot of it ineffective, ending as a weirdly intriguing, yet offputting moment of wish fulfillment for Caliban. He’s not being “rewarded” the way he’d like, sure, but the end result is what he wanted, albeit with a little more of a dark edge; and in there, “Memento Mori” loses both of its embracing, undead characters as it rushes to align its pieces for the final two episodes. When the show takes the time to explore the emotional conflicts it creates, it can be haunting in ways no other television show can approach – just look at Malcolm’s dance with his dead family members, and how much it gives Timothy Dalton to do in the span of two minutes, if you don’t believe me.

It’s hard to ignore that impact; it’s also impossible to ignore how quickly many of these stories abandon their initial trappings for the louder, superficial elements. Viktor’s a junkie again (I honestly had forgot about that), Malcolm suddenly doesn’t matter (and basically sends himself to his death, in a very odd turn of events), and Lily plots to kill Viktor; all of these stories escalate rapidly in the course of an hour, without much regard to how these moments are being spaced out. There’s been such care in setting up this story about the Hound of God protecting Vanessa from Dracula and Lucifer being brothers fighting for Vanessa, it’s clear other stories are suffering the brunt of this, with climatic moments in “Memento Mori” feeling secondary to the more exciting visual and narrative elements at play. Most of what happens is logical – though I question Malcolm going to Evelyn’s alone; after just being under her spell, you’d think he’d take a little more care – but it undercuts a lot of the show’s attempts to slowly build its story, as if John Logan and company realized halfway through this episode that they were running out of time.

And yet, “Memento Mori” still takes the time to slow down and explore important moments: Lily’s “transformation” and Evelyn’s last attempt at seducing (or killing?) Malcolm providing a solid foundation for the episode to build its aesthetics from, darkening backgrounds and eyeballs as threats of season finale-level doom and gloom loom over our heroes (sorry, couldn’t help myself there). And yes, it’s captivating and beautiful as ever – but there are a number of concerning moments that suggest some stories are beginning to fall apart (again: Dorian kills Angelique? Really? And what the hell is going on with that damn Inspector?). Hopefully, the return of Vanessa and Ethan to London will alleviate this, delivering all the hellish, heartbreaking potential it built up earlier this season in its final two hours.