Home
Movies
People Are Absolutely Raving About The Irishman Already 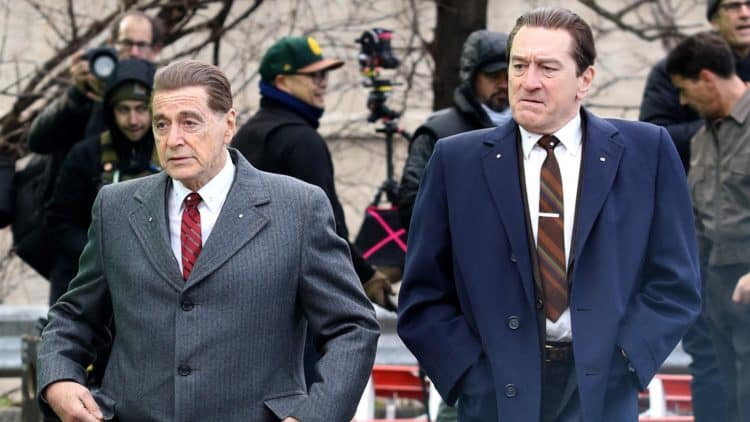 According to Hannah Shaw-Williams of ScreenRant, Oscar-winning director Guillermo Del Toro, who’s known more for his fantastical and horrific images in movies that are far unlike Martin Scorsese’s upcoming movie, The Irishman, has given this movie a very great deal of support. That’s not so hard to believe really since those in Hollywood are either trying to build each other up through flattery and by seeing what we as audience members have to work a little harder to see at times, or they’re tearing each other down without mercy behind each other’s backs. It’s true that there is a middle ground somewhere in there, but since it doesn’t make for great and riveting headlines we don’t always get to see such a moments. The fact that Del Toro seems to feel that this three-hour movie is definitely worth it means that a lot of people might at least give it a chance since it’s kind of hard for some folks to argue with an Oscar winner. I might argue with him but not this time since The Irishman does seem like an interesting movie and, despite De Niro’s childish antics as of late on TV, he is a great actor and looks primed to put in yet another great performance.

When it comes to the story of Jimmy Hoffa though there’s a lot of opinion to take into account since almost everyone that knows anything about the character has a theory as to what happened and why. The documented story of course is that Hoffa was as crooked as the letter S but was able to elude being fingered for his activities for a long time. Depending on who you want to believe he brought Frank Sheeran on as a bodyguard despite often being heard to say that he didn’t need anyone to watch over him. Thanks to known criminal Russel Bufalino however this pairing was made and Sheeran and Hoffa became very close for a long time. The story of what really happened to Hoffa is one that goes down a lot of different roads, but it was Sheeran who admitted to killing him on the orders of the people above him since Hoffa, after being released from prison, was threatening to become a massive headache for the mob since he wanted his old spot back and was ready to take over again. The act of confessing to his murder was something that Sheeran apparently did on his deathbed, though to this day a lot of people are still doubtful that the Irishman was the man that pulled the trigger. It’s kind of hard to prove or disprove the story since no evidence was ever found, and it’s been stated that there was no evidence of Hoffa being slain at the home where Sheeran said the act happened.

What is apparent is that people are already ready to see this movie come out and are awaiting it eagerly. I can’t help but discount Del Toro’s account since quite honestly listening to a director praise another director in such a gushing manner might seem all well and fine to others, but it tends to feel as though it’s not needed, and in fact it kind of feels as though Del Toro’s giddiness is a bit misplaced. Stories including Jimmy Hoffa, or stories that are about him, have usually been pretty serious affairs that have small bits of humor added into them just to make it a little lighter in some scenes, but the overall tone has usually been kept the way it needed to be. With Scorsese at the helm you can imagine that it’s going to be pretty dark and have a very gritty feel to it since a lot of his movies have had this quality over the years and he’s done well with such storytelling elements. Frank Sheeran’s story is one that is largely beset with violence since from the time he served in the US military to the time he went to work for Russell Bufalino and then for Jimmy Hoffa, he was a very violent but useful man to those in charge. Killing wasn’t much of a big deal to him, especially when it came with the job and was required of him for work. The fact that he wasn’t much of a family man never seemed to matter to him since Sheeran is said to have put the mob ahead of his own family after a while, showing his utmost devotion to those that had employed him.

As for Hoffa, many still seem willing to tell the tale of how the decision to take Hoffa out of the equation was one that Sheeran always regretted as it aged him horribly and sat like a stain on his soul. Hopefully this movie will show that kind of relationship, because quite honestly it seems to really drive the story between Hoffa and Sheeran.