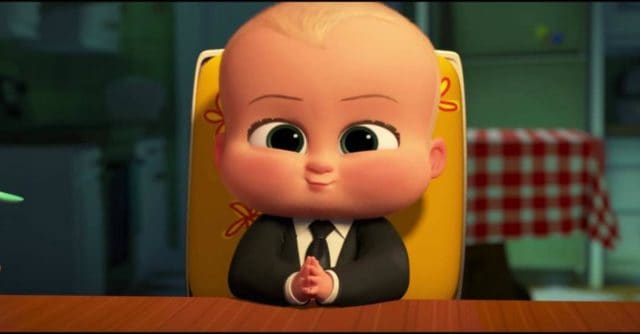 Every year at the Oscars there is at least one movie that makes everyone wonder what the Academy were thinking. This year The Boss Baby is definitely this movie. The family movie has done well, earning almost $500 million worldwide. There is also going to be a sequel due to the success of the first movie. However, a lot of people are genuinely puzzled about why it has been nominated for Best Animated Feature.

Although The Boss Baby has done very well commercially, there are many people that did not like it all. It only scored 52% rotten on Rotten Tomatoes which indicates how split opinion is on this movie. The plot is centered around a young boy that gets a new baby brother. The baby is actually a genius that carries a briefcase and wears a suit. He is voiced by Alec Baldwin. The two brothers have to unite against a character voiced by Kevin Spacey who is plotting to remove all the love from the world. The fact that Kevin Spacey is involved in the movie brings even more controversy to the nomination given his recent fall from grace.

Another reason that people are not happy about The Boss Baby being nominated is because The Lego Batman Movie has been ignored. Lego Batman was a far more popular movie and people are genuinely annoyed that it has been overlooked. This may be because The Lego Movie which was released in 2014 was also ignored by the Academy. This first movie was arguably better than the Batman one and the Academy may have felt that they couldn’t favor Lego Batman over the first movie. This wasn’t the only high profile movie to be overlooked this year. There were also no nominations for Cars 3, Despicable Me 3 or Smurfs: The Lost Village. All of these movies are part of franchises that have been a hit with audiences and have always done well at the box office.

It did not take long for people to take to Twitter to express their shock about the nomination. These days Twitter is the first place to look when you want to know what people are thinking about a certain situation and people here were definitely making their feelings clear. There were some people that showed support for the movie but most of the responses were that of disbelief that it had even been nominated, along with several people that were actually very angry about it.

So will The Boss Baby actually win the Oscar? In all honesty, probably not as Coco is the favorite in this category. Of course, there is always the chance that there could be an upset on the night but Coco does seem to be the strongest contender. Ferdinand has also been nominated which again is not the most popular film of the year but certainly no where near as hated as The Boss Baby. If the movie was to win the Oscar then Twitter is sure to be even more fired up than it is already.