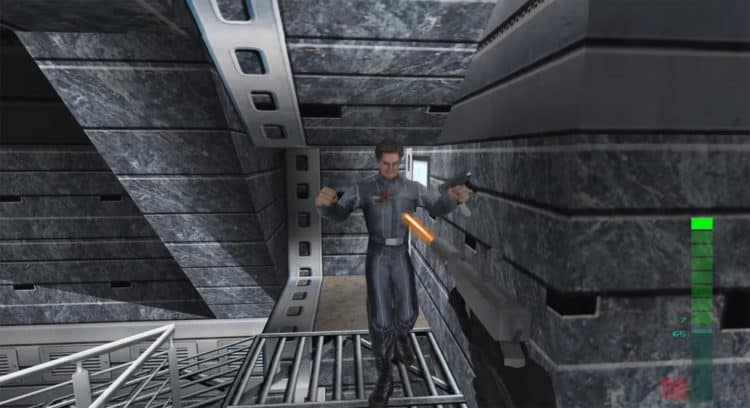 Perfect Dark was a gem that was developed by Rare and released on May 22, 2000, due to the fact of the insane popularity of Goldeneye on the Nintendo 64. The developers’ clearly wanted to strike the iron while it was still hot, so they created their own IP. Perfect Dark is an FPS that’s about a secret agent named Joanna Dark who works with the Carrington Institute to unravel a conspiracy weaved by dataDyne. The story sprawled across towering cities, underground bases, Area 51, and even outer space. The story revolved around two warring alien races called the Maians the Skedar using Earth as their battleground.

Later in 2005, another adventure for Joanna Dark came down the pike called Perfect Dark Zero for the Xbox 360. In this installment, Joanna is a flourishing bounty hunter who was trained by her father. As the title suggests, this was an origin story showing how Joanna joins the Carrington Institute. She had to stop dataDyne from getting a hold of a mystical device that grants superhuman powers to anyone that bears it. Even though this installment got mostly good reviews, it didn’t really reach the height of popularity of its predecessor. After this title was released, Joanna Dark went, well…dark.

A little over 15 years later, the world nearly forgot about Joanna Dark until a trailer dropped during the Game Awards 2020. It is being developed by a new team called The Initiative, which was formed in 2018. Nobody saw it coming and it reminded people that Joanna Dark still has the same appeal as ever before. Even though the Perfect Dark games has its niche group of fans, it never really had the steam that Goldeneye and other first-person shooters had. As a character, Joanna Dark has a lot going for her. She is this cool mix of Ethan Hunt and Lara Croft. For whatever reason, she never really became a household name. At least, not in the likes of Chun-Li, Sonya Blade, Samus, Zelda, or even Tracer. She is always kind of lurking in the shadows with all the other heroines out there. With this reboot recently announced, maybe the third time will be the charm for her? Joanna is long overdue with the recognition that she deserves. A fresh take will probably cement her as the legendary character that she was destined to be. It all depends on what her next outing brings.

There’s no doubt that the world of Perfect Dark is teeming with potential. It had everything from nifty gadgets, a blistering arsenal, white-knuckled action, and sci-fi elements. The reboot will still hold the same basic format that the other games had, but the plot is focused on a very different angle. This time, Joanna will be going against a corporation that is “eco-terrorists.” It appears that the world is dependant on new green technology that somehow went array. There are massive floodings, storms, and fires spreading across the planet. The developers over The Initiative called this plot device “eco sci-fi.” If players watch the trailer carefully, they can see that this corporation is indeed dataDyne based on the logo on the building. Whether or not the Maians, Skedar, or any other alien race is involved with this plot is up in the air.

Shining Light In The Dark

Although this will be a “reboot”, the developers had made it clear that they’ll be respecting the past installments. They will be inserting new ideas with this title while keeping the core story elements intake. It’ll be more like a re-calibration of the series. The combat will still have the gunplay that the series is known for, but the developers want to make Joanna “feel” like a true secret agent. The developers are planning on making her more nimble and having players control her with more mobility. She will be able to sprint, slide and leap over obstacles in the midst of a gunfight. It’s also a safe assumption that there will be dual-wielding, as well.

The developers that make up The Initiative come from top-tier teams within the gaming industry. Some talent from; Naughty Dog, Blizzard, Bioware, and Rockstar are working on this project. The studio is being spearheaded by Darrell Gallegher, who used to work for Crystal Dynamics. Meanwhile, the game is being directed by Dan Neuburger who stated, “We’ve been sharpening our vision of what our game is and figuring out what is going to make it unique.” Even though the gameplay details are scarce, there are some nuggets of information that give fans a taste of what to expect. Neuburger also stated, “Now we actually have the horsepower to go make this vision we have for the game.” Needless to say, the current generation hardware is indeed powerful and who knows what they can do with it?

This is a clear indicator that The Initiative has big plans for the next Perfect Dark installment. The action is going to be fast and furious with Joanna’s new move-set. Also, according to the trailer, it seems that Joanna’s famed laptop gun will be making a comeback. The fact that Joanna Dark is super-spy entices the developers to give Joanna more of that “La Femme Nikita” vibe to her. Even though there are first-person shooters that dabble in stealth mechanics, they are usually used as an afterthought. To have a game within this genre that relies solely on stealth and espionage, as opposed to gunfights, is a refreshing change of pace. Imagine a first-person Splinter Cell property to get a good feel of what direction this game is going.

So far, the Perfect Dark reboot is slated to be released on Xbox and PC. No word yet on whether it’ll be released on other consoles. The Initiative is taking this project very seriously and they want to make an “AAAA” title. Something that gamers have never seen before. It sounds like a good aspiration to shoot for and with the talent involved with this project, it’s very possible that they could pull this off.  This title is most likely going to be released sometime in 2022 or 2023.