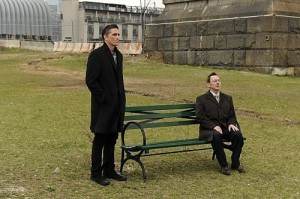 For a network that’s somewhat known for their focus on procedural dramas, well, at least this one is trying to be a little different. It springs from the minds of a fantastic creative team (JJ Abrams and Jonathan Nolan) and the two leads have every chance of becoming quite the formidable TV crime-stopping duo.What if a reclusive billionaire used his considerable resources to recruit one highly capable man to help him use the omnipresent surveillance technology of a post 9/11 NYC in order to prevent crimes? Well you’d get lots of scenes of people being tailed, spied on, and scene change graphics that involve shots of various surveillance footage from around the city. I really hope that’s not going to become something they do in every episode, it got old about halfway through. But the first episode showed enough solid promise that I could see this show getting the chance it needs to really come into its own.Basically, Jim Caviezel plays a man with no name (or several depending on how much you know about him) and a dark past who’s minding his own crazy hobo-bearded self when Mr. Finch approaches him to help with this project he’s been working on. If the pilot episode had a title it would be ‘Exposition’ as that’s basically what the entirety of Emerson and Caviezel’s scenes consist of. And that’s fine for the first episode, because the premise needs to be understood so that in future episodes they can just get on with telling their stories. It’s certainly seeming like Mr. Finch ignoring the ‘irrelevant’ listings is likely what lead him to start this quest for justice. And what could have led to that pronounced limp Emerson is giving Finch when he moves around in his scenes.

The two leads have a decent amount of chemistry with room for growth as the intricacies of each character reveal themselves. All we know right now is that John Reese lost someone very close to him and he was part of the CIA before he was presumed dead–a trait also shared by Finch. So these two ghost on the edges of society to try to stop what can be stopped. The show even admits that crimes of passion won’t be prevented by what Finch’s machine can do. But with some clever writing and good interplay between characters, this show can go far. 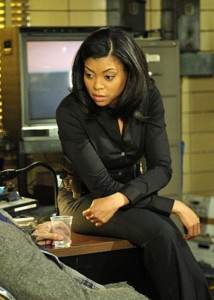 For one thing, any show that puts Michael Emerson (he of LOST fame) on my TV screen weekly is providing a service. From the moment he appears on-screen, you want to know everything there is to know about Finch and in less capable hands that wouldn’t happen. The opposite is true of Caviezel’s John Reese. It appears that there are going to be flashbacks and such to show how he became the kind of man who wound up with no one. Frankly, I’m more interested in seeing how his character can grow within his current life situation and with the new people he’ll wind up meeting like Finch and others such as the cop he wants to work with, or Taraji P. Henson’s Detective Carter–the inevitable character who will follow the breadcrumbs to wind up involved in Reese and Finch’s mission.

I’m also looking forward to seeing what sort of production value future episodes hold. In this episode there were all the musical accompaniments and brash stunt sequences you might find in an action suspense film. A personal favorite had to be the very Jason Bourne-like way that John takes out a room of thugs in order to steal their artillery. That’s what Caviezel is bringing to the table–bravado and a hint of ‘don’t know what he’ll do next’ spontaneity. And because it is from Bad Robot I of course have high hopes that the show will build into the type of top-notch action-filled drama it has the potential to be.