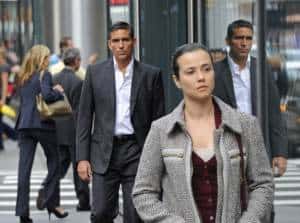 There’s something to be said for the attention to detail present in Person of Interest when even the title of an episode contains some thought-provoking double meaning. If you know Latin or if you had to Google it, cura te ipsum can be translated as ‘˜cure yourself first’; it’s something that refers to a physician healing themselves first before they should attend to their patients. Now on the surface we have this week’s POI via Finch’s machine a physician named Megan Tillman who is living a double life as she prepares to honor her dead sister’s memory by bringing a wealthy sexual predator to justice, vigilante-style. But by the unconventional ending scene of the episode there’s no denying that cura te ipsum can be seen in a very different way about our dynamic duo of Finch and Reese.

Back in college, Andrew Benton date-raped Tillman’s sister and it lead her to commit suicide not long afterward, but this is no one-time thing. Andrew has been collecting victims through the years since and he shows no signs of ever stopping unless an outside factor forces him to. So it’s up to Megan to bring Andrew to the kind of justice his status is incapable of saving him from. Once Reese realizes the true nature of Megan’s situation, this POI case goes from trying to stop a murder to trying to stop someone else from having to live with the consequences of taking a life as Reese himself does everyday.

But the problem with this episode rests purely in that struggle for Megan’s soul. It’s quite difficult to become invested in such a battle when we’re not given a chance to understand Megan’s pain, at least in more than an exposition-driven way. What leaves her story to fall flat for most of the episode is the mistake in having this story as well as some drama with unwilling accomplice, Fucso, having problems with a drug cartel that divert Reese’s attention. Now I’m not saying that the Fucso story doesn’t ultimately pay off, it does, but at the expense of not letting the POI case deepen the way a proper revenge story should. It would have been a better fit to have the Fusco story, and how it later on changes the Detective Carter plot-line, feature in a future episode.

I did like the moment between Carter and Finch though, it’s great that she’s using the same type of resources they are (in this instance, surveillance footage from the evidence storage facility) in order to further her agenda. I gotta admire Finch’s attention to detail in preparing the life of his cover identity just in case someone came around to ask questions. Unfortunately, he’s being pitted against someone whose own tenacity and attention to detail led her to asking the kinds of questions that he had a hard time answering without awkward hesitation and badly told lies. 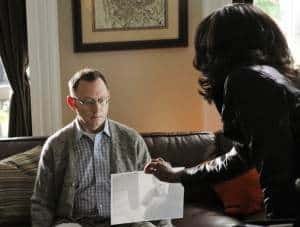 Also, I wasn’t very taken with Linda Cardellini’s portrayal of Megan; there should be a spark of anger, frustration, and motivation to act in a character who is worth rooting for in this type of tale–she unfortunately didn’t embody these traits. Again, it’s not like there was room in the script for her to get a chance to show any of these qualities in the first place. During her meeting with Reese in the diner, what should have felt more like a tense give and take between desire and morality resulted in tears and regret on her end. All of the dramatic impact of a heroine in a Lifetime movie of the week. I understand that the point was she didn’t have the killer’s heart and capability like Reese does, but she could have been a little bit more fierce in her convictions.

Back to that episode title, it can be taken out of the context of Dr. Tillman’s story and easily put into a line of thinking about John Reese in particular. Here we have a man who, by all accounts, is as broken as the day Harold Finch found him and recruited him onto this project. He may be sans beard of sadness (a personal favorite TV trope of mine from the pilot) but just a look into his eyes reveals that Reese remains a deeply haunted man who perhaps isn’t capable of doing what might be considered the right thing. Sure, he kept Megan from carrying the burden of murder, but as he sat at a table across from her former intended victim…it was easy to start to wonder if Benton would escape death entirely.

John might have been weighing his options out loud, but he already seemed to have his mind mostly made up. Why else would he be sitting with Benton in the place Megan set up as a kill room of sorts (for all you Dexter fans out there)? There’s no reason to let good lye go to waste either, but the ending of the episode happened soon after this moral quandary played out–giving it over to the audience’s mind as to what should happen next. Just as Reese questions if a person can really change, it led us to wonder about the concept of this damaged individual being put in the position to have final say in the fates of others. We keep hearing reference made to all of the dark events of his past, but until Reese is able to face and deal with them, he’s going to continue to make choices that prove that Det. Carter hunting down a dangerous vigilante might be for the best in some instances. Hopefully not this one though, I greatly hope that Benton went down for all of his past sins because a guy like that would never change–all he’d do would become better at hiding his indiscretions.

Hopefully, next week’s episode will be a little more streamlined, and perhaps focus more on either the latest number from the machine or one of the overarching story-lines of our main characters. This show is still bringing a unique level of introspection and thoughtfulness to the procedural drama that it’s definitely been a treat to watch every week. In addition to the fact that John Reese’s bursts of violence have become something worthy of their own drinking game or internet meme at this point. It’s the new David Caruso one-liner/sunglasses moment for me whenever he starts to crack some skulls.