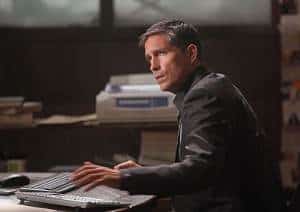 If there is one sure-fire way to please the audience for Person of Interest, it’s to have Michael Emerson perform the introductory voice-over for the series. The voice of Ben Linus rests in the hearts and minds of many a TV fan and he manages to perform the necessary exposition without allowing the premise of the show to seem complicated when he’s finished. There’s a machine, he built the machine, and the machine spits out numbers–if you’re number is up they’re going to find you for better or worse.

This week, Finch and Reese assist in helping a girl who, by all accounts, died many years ago. When I watched the pilot of this series last week, it seemed plain to me that the show was going to live or die not necessarily by the strength of the case of the week, but by the interactions of the characters and now, apparently, the mythology of the machine itself. Count on a show that comes from Bad Robot and a Nolan to not just let the tech at the center of the show’s premise remain in some dark corner somewhere–instead we dive into starting to learn about the inception, (yeah I couldn’t help it really) of the machine and the secret origins of its creator, Mr. Finch. In order to do that, POI turns to something as familiar to fans of LOST as seeing the face of Benry himself on their screen, the flashback.

Speaking of LOST, who else should turn up as Mr. Finch’s apparent former partner but someone who played a fellow Other on the series? Bret Cullen, the man who played Goodwin, shows up in two separate flashbacks, 2002 and 2007 respectively. Back when Finch wasn’t quite the man we see today but remained just as content to stay in the shadows. Let me just say right here that in terms of ‘fan service’ this is how you do it right–it’s not overly flashy or attention seeking in the way that they use an actor from Michael Emerson’s former series to play this role. His character was also the man who first urged Finch to use the irrelevant list for a better purpose than to just let it go to waste.

One of the most amusing reveals of the episode had to be in the present-day when Reese discovered that Finch is pulling something of an Undercover Boss routine in his own company. It’s a fascinating ploy for Finch to pose as a cubicle drone programmer right under the noses of the very people he secretly signs paychecks for. For a guy who uses technology to keep an eye on just about everyone, it’s nice that he still finds worth in the old-fashioned approach of blending in among the crowd to watch the crowd. 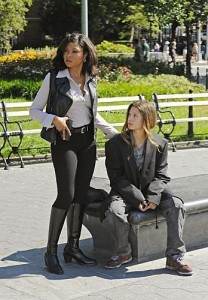 This episode marked a needed advance in Detective Carter getting closer to her mysterious man in a suit leaving quite the growing body count all over her city. Hopefully the way this story was handled will be an indication of a sly cat and mouse game to come between she and Reese–ultimately leading to some sort of greater understanding between them. True, Reese has a source in the police department as of right now but it would make sense for that to be a temporary situation if Det. Carter is to become a greater part of the POI fold. It just doesn’t seem at this point like she would make sense as a true adversary for the duo at least on a long-term basis.

What’s going to keep people around to watch this show on the immensely crowded Thursday night TV schedule is the exact sort of thing that was hinted at not only in the flashbacks of Finch’s character this week and the glimpse of Reese’s tragic past in the pilot, but in something like the suggestive passing shot of what appeared to be a sculpture in the likeness of Finch’s partner in his company. Does this have to do with Harold’s pronounced limp and increased need to not only be isolated but in control of the nature of his social interactions? I would imagine so, and that’s why this show, in only its second episode, is already proving to be more than a standard procedural. Flawed characters, interest in exploring back-story, and not to mention some pretty satisfying action sequences are adding up to show that Person of Interest has the intent of fulfilling its pilot episode potential.