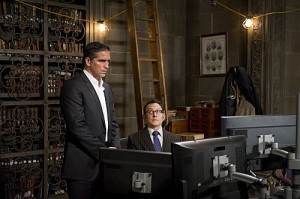 In case you missed last night’s Person of Interest, here’s a quick recap of all the good stuff and of the less than entertaining parts you’ll need to know about for next week. My saying about this series is that it’s usually only as good as its POI of the week stood to remain true as this week’s ‘˜person’left the overall plot of the episode to be a bit lacking. But what made the hour worth watching would be the continued integration of Det. Carter into the main cases as well as another piece of Finch’s back-story puzzle. It’s well-known how happy that made me, and hopefully other viewers as well, that we’re continuing to get a little more lately about Finch’s mysterious falling out with his former partner.

The Person of Disinterest
I wouldn’t keep saying this if it didn’t keep proving to be true again and again; when the POI case of the week isn’t all that intriguing it sort of weighs the episode down all around it. This week we had Andrea Gutierrez, a former troubled kid who made good and is now a defense lawyer in debt trying to help a convict get off from wrongful drug charges. She’s the very model of a good citizen trying to make a difference in the world, and perhaps that’s where things just get a bit dull.

It turns out there’s a parole officer who’s involved in a foster kid scheme with the children of the convicts he sets up so they go back behind bars. Everyone knows that there’s certainly money to be made when it comes to housing foster kids and that’s why Andrea was being targeted. She was getting too close to unraveling everything by trying to defend one of the set-up convicts whose son had been placed into foster care. After a quick red herring, it didn’t take much to figure out who was really behind the scheme when the nice guy, Chris, from earlier in the episode turns out to be the mastermind of the scheme. Overall, the case itself wasn’t all that interesting and while ‘˜preventing bad things from happening to good people’is often the goal of Finch and Reese (and now Carter), this week’s case was a bit of a snooze itself as that side of the story wasn’t as compelling as the other plot-lines in the episode. But we did get to see an attempted ‘˜Reese-takedown’scene made out to be more realistic than in most shows as Reese actually is allowed to remember and feel the recent gunshot wound he’s still healing up from. Even wounded, he’s still quite tenacious in a fight.

Three is Better than Two (and Four is Best)
This week, Det. Carter was part of the POI case from the get-go as she worked legitimate angles alongside the tactics of Reese and Finch in order to save Andrea’s life. We knew this was going to be the start of the new team as the first moment Carter was on-screen, she was meeting face to face with Reese for a sit-down at this show’s favorite meeting location, a diner. It’s easy to see that Reese is impressed by Carter but he’s still not fully ready to trust her outside of trying to work alongside her. But Detective Carter definitely proved to be quite the asset for the boys as they tried to figure out why Andrea was in danger. As for the former sole police asset to Reese and Finch’s operation, Fusco has been kept out of the loop about Carter being let in on what they’re doing. Reese reasoned with Finch that they’re both good assets and it will be better to keep them separate from each other to keep the other honest. Fusco can keep an eye on Carter and vice-versa especially when Agent Snow and his men make their eventual reappearance. 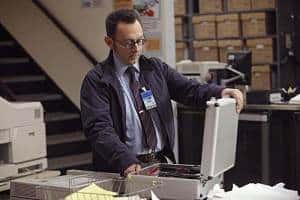 Another Piece of the Finch Puzzle
This episode of Person of Interest is titled ‘˜Legacy’and, like most of this show’s episode titles, it has some double meaning. However the main plot-point it can relate to would be the first appearance of a new character, Finch’s ex-partner’s adult son. Will is bailed out of jail by Finch and at first it’s all sunshine and old memories as they seem to have a natural rapport with one another that lends to the fact that Will must have known Finch most of his life. Soon, however, Will starts asking questions about Nathan that Finch can hardly answer or wish to do so. Questions about a time when their old company was completely shut down for a period of seven years, and about the big government project that was purchased for a mere dollar. Making it as Will says, ‘˜either really unimportant or…’Yeah, you can fill in the blank yourself I’m sure as Will seems to be a bit too curious for his own good. There was palpable tension from Finch’s end when Will started querying about the company and I think it’s because Finch is the one who had Nathan taken care of. I’m sure we’ll soon see how bad things got between them in one of the show’s nifty flashback sequences but it was surely no ‘˜accident’as it keeps being referred to. It’s clear that Finch doesn’t want to have to stop Will’s dangerous questions, but if need be he definitely will.