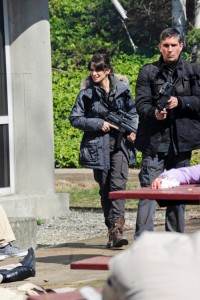 By now it’s become clear that there are basically two ways to watch Person of Interest. Either you’re just there for the fun of the procedural POI of the week format or you’re into it for the bigger picture. Last night’s episode proved that those of us that have been paying close attention to the flashbacks of the characters have some nice payoff story-wise in the coming final episodes of the first season. Which is a bit of a relief as initially John Reese’s flashback sequences didn’t seem to provide much for the show other than background Intel on how Reese was like before he met up with Finch.

From the 2010 flashback sequence, it’s apparent that Reese has reason for his trust issues as we witness his final mission with former partner, Stanton. The parallel is clear between Reese and Tommy Clay (The POI) in the present and Reese and Stanton in the past as he wound up protecting and then targeting both. In 2010, after the order was given to take her out at the end of their last op–a mysterious trip to China referencing a ‘˜machine’that resulted in the duo coming upon a mass of bodies at their destination. Suddenly Reese’s flashbacks inch up to the level of interesting that Finch’s inherently have as the question about what machine was being referenced to is left hanging. But what at first seemed to be a doomed fate for Stanton when their employers turned against she and Reese turns into a great reveal at episode’s end–Stanton is alive.

One of the most interesting themes in this episode was brought to the forefront via a snippet of dialog from Kara Stanton. She talked about the advancement of technology and how it would eventually outweigh the capabilities of man in terms of its usefulness. There’s no question that the core piece of tech in the series, Finch’s mysterious Machine, has incredible capabilities but it wouldn’t accomplish anything without the people who work off of its info. It’s a necessary coexistence for both man and technology at least in the case of this particular series. And sometimes it doesn’t even do much good at all as in this week’s first-time occurrence of a POI being both victim and perpetrator. 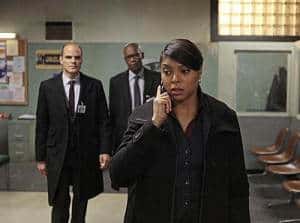 As for the human components of the show’s machine, this week saw Carter continuing to struggle with her trust issues with Reese and Finch’s doings. There’s definitely been reluctance for the duo to commit to the idea of a full-fledged team as Carter only gets pulled in when they need help, which is increasingly often. Fusco too is kept at arm’s length even though this week he definitely proves his loyalty to Reese at the possible expense of his relationship with HR. But it’s become clear that even though Elias is supposedly locked up and out of the way that they’ve all been through too much together to continue working separately for much longer. Also, Reese has a real propensity for getting hurt which is refreshing when most TV leads walk away without a scratch on them most of the time.

It really feels like Reese and Finch’s pasts might just come together at some point that would then lead to them working together beyond just pure coincidence. The China mission definitely left some questions behind and I’m sure Stanton is going to do her best to get to the bottom of why Snow betrayed her and Reese. Having her around for the season one endgame has given the story a great unexpected additional player whose true allegiances are unclear at the moment but we do know she’s definitely against Snow. Hopefully that means that Finch and Reese will have another ally and not another enemy as the season draws to a close.