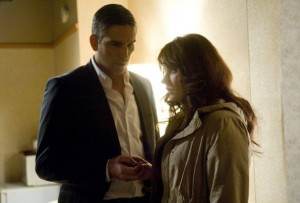 It’s John Reese’s birthday and this week’s episode had Finch trying to give him the greatest gift of all–keeping him from committing a very immoral act to a very immoral perpetrator. Along the way the rest of Reese’s personal back-story was fleshed out. Detective Carter even had a moment where she tried to be Reese’s conscious and learned that maybe he’s not what people think he is anymore.

By now we’ve seen that while Reese has no issue with resorting to violent tactics to get the job done there are definitely certain types of case scenarios where he may just go too far. Previously this season there was an end sequence that asked the viewer to come to their own conclusion about Reese’s capacity to kill a man during his Machine cases. Albeit, one who was after a woman and would have killed her himself had Reese not gotten there first. The episode drew to black with the question mark lingering and many likely assumed that he did just that. No answer was given for that particular episode but ‘˜Many Happy Returns’showed that it can go either way with John Reese.

During the episode at two different points, John likely kills one abusive husband while setting the other up for a very long stay in a foreign prison. But he had a point when he argued about it with Det. Carter depending on the viewer’s own sense of morality. These are truly bad people and especially in the case of a U.S. Marshall being a wife-beater, there’s every chance in the world he could have gotten off scot-free unless someone made sure that he couldn’t this time. Personally it’s a lot easier for me to cheer for an abusive spouse to wind up at the bottom of the Hudson after the abuse is clearly glimpsed (and then implications made about the extent of it being that he was about to end her life before Reese showed up).

It’s not hard to see why Finch balks at the very concept of physical retribution. The man was in wheelchair for who knows how long after his still-mysterious injury was incurred and he continues to live each day with a painful reminder of what it’s like to have been a victim. He also knows when it’s best to stay out of John’s way and to perhaps even give him some benefit of doubt which led to him calling Carter. He knows that he couldn’t get through to Reese so maybe she could get him to realize there’s other ways of dealing with these sorts of problem perpetrators. There’s definitely always going to be this interesting conflict of a pacifist having hired a well-trained man skilled at the art of combat and worse to be a sort of savior for the innocent and mistreated.

These new flashbacks informed us that John’s ex’s new husband abused her and it led to her death not long after she called him for help in the prior episode’s time-turning sequence–that’s one thing that makes these recurring sequences work so well is they’re definitely more than just exposition as the flashbacks, when put in order, combine into a mostly complete narrative on their own. A narrative that included the real first meeting of Finch and Reese. It made for a nice ‘˜aha’moment on its own to be told how Harold truly came to be aware of John Reese and why he knew he should keep John away from the current case of domestic abuse. 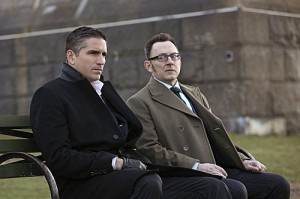 The consequence for the U.S. Marshall that Reese dealt with proved that perhaps being involved with Harold and the Machine, not to mention the wide array of people who he’s met because of these cases, have even changed John Reese for the better. He’s helped a number of people in ways that no one else would have been able to in time, and Finch truly has given Reese not only a purpose but a chance at a new beginning. The final shot of Reese exploring his birthday present gave us Reese being as close to finding peace with himself than we’ve yet seen on Person of Interest. Now if we could only fill in the blanks on Harold Finch’s past, then I’d be supremely pleased with the first season of the show as a whole–I’m simply dying to know more about him all the time. I blame Michael Emerson’s infuriatingly charismatic enigmatic character portrayal in addition to the writing for giving us just enough to make us crave more especially when the focus is on someone else.