Home
V
Photos: V 2.9 “Devil In A Blue Dress” – Only One Episode Left This Season! Don’t Miss The Excitement! 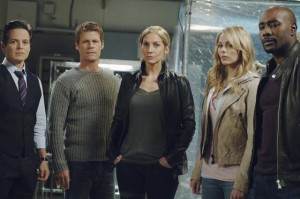 On tomorrow’s new episode of V, “Devil in a Blue Dress”, Sid (Bret Harrison) realizes the amount of energy needed to run the Concordia reactors is about a trillion times too much. This means the Fifth Column must spring into action and find out what Anna is really up to. At her press conference, the audience watches Anna flick ‘Blue Energy’out of her hands like she’s a wizard. She explains nothing, but like children at a circus the world is impressed because it looks cool.

Chad’s new partner, Kerry, is supposed be the counterpoint to Chad’s V reporting. She finds out in this episode that she is not alone in her viewpoint on the Visitors, but it’s not an easy ride to get there. She cannot let on that Chad isn’t V-friendly.

Diana tells Lisa the time is now to rise up and take her rightful place as queen, and to save humanity from total annihilation. Lisa sends Ryan to convince the Fifth Column that sending Sid in to mess with Blue Energy is a bad idea, but who wants to believe Ryan these days?

From the pictures, it ultimately looks like Lisa and Ryan both accompany Erica to address the obviously skittish, gun waving Fifth Column members that they really do care about the fate of humanity. Everyone is standing around trying to figure out what to do. Clips show the Concordia stations are loading docks for an invasion of earth. With 368(ish) of them around the world, you can imagine what this would mean for humanity. In how many languages can you say goodbye?

Will the Fifth Column, with the help of Lisa, Ryan and Diana overthrow Anna and thwart her efforts before the end of the season? With only one episode remaining, it should be a heart pounding race against time!

Catch the latest episode of V tomorrow, Tuesday, March 8th at 9pm EST on ABC. Remember to set your DVRs accordingly as the episode will run a minute into the ten o’clock hour.