The third season of 90210 premieres on Monday, September 13 and we previously posted promo photos and a sneak peek for the season premiere. Now the CW has released photos and short synopsis for the September 20 episode.

Question: why does Silver’s hair keep getting shorter with every season? I don’t know how much shorter she can go for season 4. 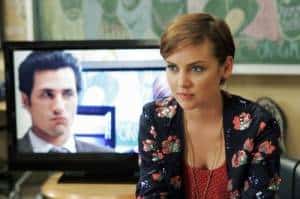 Naomi (AnnaLynne McCord) finds out she can now access the money in her trust fund, so she decides to throw a giant birthday party where The Honey Brothers (featuring Adrian Grenier, ‘Entourage’) perform a few songs. Dixon (Tristan Wilds), Navid (Michael Steger) and Liam (Matt Lanter) decide to take Oscar (guest star Blair Redford, ‘Passions’) out for a night on the town, but their party ends when Ivy (Gillian Zinser) finds a Facebook photo of Dixon doing a body shot off a girl.

Annie (Shenae Grimes) has an instant connection with Charlie (guest star Evan Ross, ‘Girlfriends’), a guy she meets at a coffee shop, but seems more interested in exploring her relationship opportunities with Liam. Jen (guest star Sara Foster) is forced to go on bed rest until she delivers the baby and has no choice but to allow Ryan (Ryan Eggold) into her life. Silver (Jessica Stroup) confronts Teddy (Trevor Donovan) about his drinking problem. Lori Loughlin and Jessica Lowndes also star.