90210 season 3 premieres on Monday, September 13 and the CW has released promo photos for the season 3 premiere episode. No episode summary yet, but the network has released a general summary about the third season. You can also view a promo for the new season that we previously posted here. 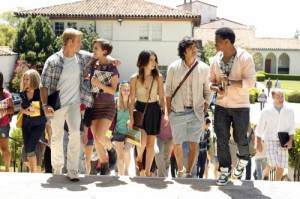 The third season of 90210 welcomes the West Beverly kids to their senior year of high school. It’s the time of college acceptances and lovers’ rejections, the time of prom dates and promises betrayed, the time of spring break, break-ups and make-ups – but as is always the case in Beverly Hills, it all happens in a world of sun and fun, palm trees and warm sea breezes, success and excess. From the very beginning of the school year, the lives of the West Beverly group will be shaken up in a way none of them could ever imagine. And from this new starting point, their journeys will take them to staggering new heights and terrifying new depths. We’ll see the rise of a pop sensation and the fall of a group of friends, the beginning of a new love and the end of a professional dream, the creation of an unlikely family and the demise of another. And that’s just the first week of school… It’s now or never for the students of West Beverly, and they’re not going to waste a moment of time.

Expectations are high, hormones are raging, and scandals are hiding around every corner. From the brightest moments of love and happiness to the darkest hours of shame and fear, senior year at West Beverly promises to be an unforgettable journey into the lives, hopes and dreams of those lucky few who call 90210 home. The series stars Lori Loughlin as Debbie Wilson, Shenae Grimes as Annie Wilson, Tristan Wilds as Dixon Wilson, AnnaLynne McCord as Naomi Clark, Ryan Eggold as Ryan Matthews, Jessica Stroup as Silver, Michael Steger as Navid Shirazi, Jessica Lowndes as Adrianna Tate-Duncan, Matt Lanter as Liam Court, Trevor Donovan as Teddy Montgomery and Gillian Zinser as Ivy.