Brothers & Sisters is currently on hiatus until February 13, but ABC has already released a few promo photos and a summary for the upcoming episode. 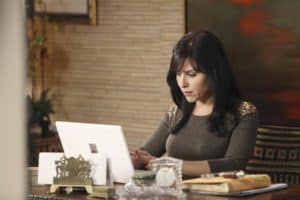 VALENTINE’S DAY BRINGS A MIX OF EMOTIONS FOR THE WALKER FAMILY, ON ABC’S “BROTHERS & SISTERS”

“The One That Got Away” – The Walkers’ plans to celebrate Valentine’s Day go horribly wrong when Tommy tells Sarah about another secret that Nora has kept buried since they were kids, and Saul’s hopes for a romantic evening with Jonathan (Richard Chamberlain) are dashed by a visiting high profile food critic, on “Brothers & Sisters,” SUNDAY, FEBRUARY 13 (10:01-11:00 p.m., ET), on the ABC Television Network.

“The One That Got Away” was written by Gina Lucia Monreal and David Babcock and directed by Michael Morris.