The Walker family celebrates Christmas on the mid-season finale of Brothers & Sisters, airing on December 12. Below are promo photos and a synopsis from ABC. 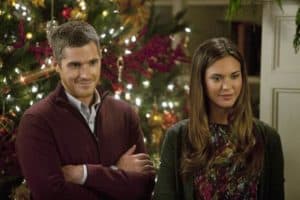 NORA FLEES THE NEST FOR A SPONTANEOUS CHRISTMAS GETAWAY AND LEAVES HER VERY DYSFUNCTIONAL FLOCK TO FEND FOR THEMSELVES, ON ABC’S “BROTHERS & SISTERS”

“Cold Turkey” – With the holiday season come panic and discord in the Walker family when Nora takes a last minute getaway with Karl. Saul has a chance encounter with a past love, guest starring Richard Chamberlain as Stephen, who he believes had a lasting and very permanent effect on his life., on “Brothers & Sisters,” SUNDAY, DECEMBER 12 (10:01-11:00 p.m., ET), on the ABC Television Network.