You know what’s kind of freaking me out? Episode 20 of season 2 of Castle will be airing on April 12. That means the season is almost done. In fact, a lot of shows will be ending in late April and early May. EEK! Summer television season is soon upon us and then we’ll have to suffer months and months without new episodes of our favorite shows. SUCKS!

ABC has released promo photos and a synopsis for the April 12 new episode of Castle, which you can view below. Expect a lot of guest stars for the episode. 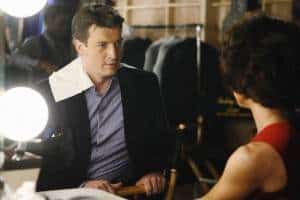 “The Late Shaft” – When Castle appears on a late-night talk show to promote his book, Heat Wave, legendary host Bobby Mann (guest star Tom Bergeron) leans in during a commercial break and whispers, “They want me dead.” When Mann dies later that night, seemingly of natural causes, Castle has to convince Beckett that there was foul play. During the investigation, Castle is seduced by a Hollywood hottie (guest star Kelly Carlson), who was the other guest on Bobby Mann’s show the night he died, on “Castle,” MONDAY, APRIL 12 (10:00-11:00 p.m., ET) on ABC.