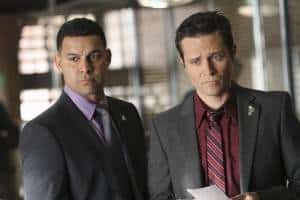 CASTLE & BECKETT INVESTIGATE THE RECIPE FOR MURDER OF A HEAD CHEF, ON ABC’S “CASTLE”

“Food to Die For” – A high profile chef is found frozen to death in the kitchen of a hot New York restaurant. Complications ensue when Castle and the restaurant owner, an old high school girlfriend of Beckett’s, share an attraction. Meanwhile, Beckett’s relationship with Det. Demming continues to grow, on “Castle,” MONDAY, MAY 3 (10:00-11:00 p.m., ET) on ABC. Rocco Dispirito guest stars in the episode as a fan of the dead chef and a fan of Castle’s books.