Another roadblock is thrown up between Castle and Beckett with the arrival of Beckett’s ex-partner on the October 4 new episode of Castle. Below are promo photos and a synopsis from ABC. 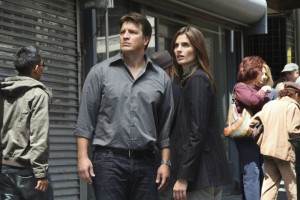 CASTLE & BECKETT TRY TO SOLVE THE MYSTERY OF A DEAD BAIL BONDSMAN, ON ABC’S “CASTLE”

“Under the Gun” – When a coded document hidden by a murdered bail bondsman gets Castle’s imagination running wild, Beckett must steer the case back to the violent felons who populated their victim’s world – only to discover that maybe Castle’s crazy theories aren’t so crazy after all. Complicating matters is the surprise arrival of Beckett’s ex-partner (now a bounty hunter). As the two reunite over a history that Castle has no part of, Castle is forced to watch the relationship take a turn towards the romantic, on “Castle,” MONDAY, OCTOBER 4 (10:01-11:00 p.m., ET), on the ABC Television Network.