The seventh season of Desperate Housewives premieres on Sunday, September 26. We previously posted sneak peeks and promo photos from the upcoming premiere and now ABC has released photos and a synopsis for the October 3 episode, which you can view below. 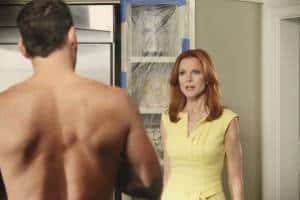 SUSAN FEELS GUILTY ABOUT LYING TO MIKE ABOUT HER NEW, RISQUE SIDE JOB, BREE UNEXPECTEDLY FIRES KEITH WHEN SHE FINDS HERSELF FALLING FOR HIM, LYNETTE THINKS RENEE IS TRYING TO SABOTAGE HER MARRIAGE, AND PAUL INTRODUCES THE LADIES TO HIS NEW WIFE, ON ABC’S “DESPERATE HOUSEWIVES”

“You Must Meet My Wife” – After Renee begins spending a lot of time with Tom, an angry Lynette feels she’s trying to sabotage their marriage; Bree fires Keith (Brian Austin Green) without warning when she suddenly finds herself falling for him; Susan is wracked with guilt about lying to Mike about her new, risque side job; Gabrielle rushes to the hospital after learning that Bree accidentally hit Juanita with the car; and Paul introduces the women of Wisteria Lane to his new wife, on “Desperate Housewives,” SUNDAY, OCTOBER 3 (9:00-10:01 p.m., ET) on the ABC Television Network.