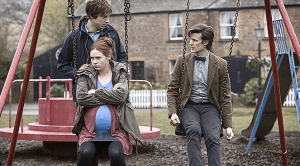 The new episode of Doctor Who, entitled “Amy’s Choice,” looks to be one of the most psychological episodes of the new season yet. There’s nothing wrong with that at all; in fact, when the show gets psychological and complicated is when I love it the best. This time, the Doctor locks horns with a man called the Dream Lord, played by Toby Jones (or Dobby from Harry Potter and the Chamber of Secrets). The Dream Lord turns out to be an all-around mean guy, as proven when he locks the Doctor, Amy, and Rory in a dream world and tries to make them choose which world is reality — by dying. If they die in the dream, they wake up in reality and are freed. But if they die in reality, well then “You die, stupid. That’s why it’s called reality.”

I just posted the video promo for the episode, but you can also check out some promo pictures below, including a look at some inhabitants of “the village that time forgot,” and a look at the Dream Lord himself. Oh, and at Rory’s strange-looking ponytail.