The musical episode of Fringe airs on April 29, but FOX has now released promo photos and a synopsis for the May 6 episode next week. View them below. 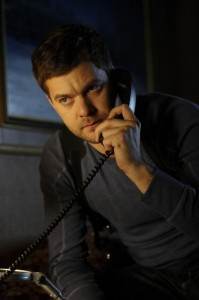 PETER TEAMS WITH LOCAL AUTHORITIES ON A MYSTERIOUS MURDER CASE AND SOMEONE FROM THE ‘OTHER SIDE’PAYS A VISIT ON AN ALL-NEW ‘FRINGE’THURSDAY, MAY 6, ON FOX

Peter teams up with a local law enforcement official, Sheriff Mathis (guest star Martha Plimpton), on a serial murder investigation with ties to Newton (guest star Sebastian RochÃ©). Meanwhile, Walter copes with the possibility of being sent back to St. Claire’s, and someone from the ‘other side’pays a visit in the all-new ‘Northwest Passage’episode of FRINGE airing Thursday, May 6 (9:00-10:00 PM ET/PT) on FOX. (FR-220) (TV-14 L, V)