The season finale of Grey’s Anatomy won’t be ending until May 20, so there’s still a few more episodes to go. ABC has released promo photos for the all new episode that will be airing on May 6.

You can also view some sneak peeks we just posted for the episode. 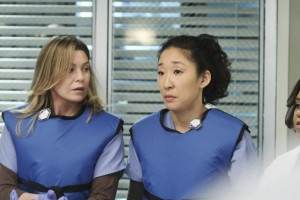 A 700-POUND PATIENT PUTS THE TEAM TO THE TEST, ON ABC’S “GREY’S ANATOMY”

“How Insensitive” – Bailey preps the team with mandatory sensitivity training prior to admitting a 700-pound patient with compounded medical issues, and the case proves to be challenging in every sense of the word. Meanwhile Derek has to come face to face with a former patient’s husband in a wrongful death deposition, and spending time with a heart patient’s daughter opens up some old wounds for Cristina, on “Grey’s Anatomy,” THURSDAY, MAY 6 (9:00-10:01 p.m., ET) on the ABC Television Network.