A new episode of Grey’s Anatomy will be airing on February 18 and then will go on hiatus until March 4 (see when other shows return from Olympic hiatus). ABC has released several promo photos for the March 4 episode, along with a synopsis, which you can view below.

You can also check out sneak peeks for the February 18 episode we posted recently. 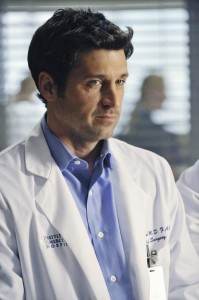 THE RENOWNED DR. HARPER AVERY PAYS A VISIT TO SEATTLE GRACE-MERCY WEST HOSPITAL AS A PATIENT, AND EVERYONE IS ON EDGE, ON ABC’S GREY’S ANATOMY”

“Perfect Little Accident” – When famous surgeon Dr. Harper Avery is rushed to Seattle Grace-Mercy West, the staff is surprised to discover that one of their own is related to this legend, and his unorthodox request for his surgery causes tensions t between Derek and Richard. Meanwhile Callie and Arizona try to help Teddy and Sloan move on from their pasts and find greener pastures, on “Grey’s Anatomy,” THURSDAY, MARCH 4 (9:00-10:01 p.m., ET) on the ABC Television Network.