Expect to see a big song and dance number on the November 17 new episode of Hellcats, when Derrick recruits the cheer squad to help him propose to Vanessa. Below are promo photos and a synopsis for the November 17 episode from The CW. 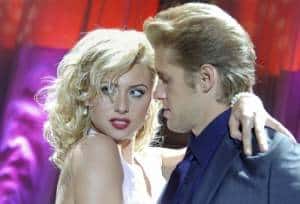 A compromising picture of Alice (Heather Hemmens) is sent around school, humiliating her. Lewis (Robbie Jones) feels bad for Alice and agrees to help her find the culprit. The two discover Damian (guest star Josh Emerson), a football player, is the culprit and she vows revenge and plans to out him after she finds out he is gay. Red (Jeff Hephner) and Vanessa (Sharon Leal) hear of her plan and set out to stop her before she does something she will regret.

Meanwhile, Julian (Gale Harold) discovers Marti (Aly Michalka) and Morgan (guest star Craig Anderson) are investigating Travis’s (guest star Ben Cotton) case behind his back and cuts them lose from the team. Dan (Matt Barr) continues to be conflicted about his feelings for Marti so he makes a harsh decision about Savannah (Ashley Tisdale). Derrick (DB Woodside) decides to ask Vanessa to marry him and enlists the Hellcats to help choreograph a dance number for the proposal. Debbie Allen directed the episode written by Peter Calloway