Yesterday we posted two sneak peeks and a promo for the upcoming series finale of LOST (here and here) and now ABC has released the final set of promo photos for the final episode of LOST. The series finale of LOST will be airing from 9:00 p.m. to 11:30 p.m. EST (with a two-hour recap show beginning at 7:00 p.m.) on Sunday, May 23.

Our international readers will be happy to know that the finale will be airing at the same time in several countries as it will be on the U.S. west coast: 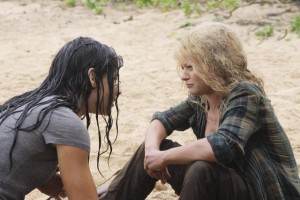 London/Hong Kong — The Walt Disney Company today announced that the two-and-a-half-hour finale of “Lost” will be made available to international platforms faster than the series has ever been before, in line with global demand. The continually accelerated international delivery of this groundbreaking show is in keeping with Disney’s commitment to offer consumers legitimate, flexible ways in which to enjoy its must-see programming.

Driven by fan demand – and regardless of the international time difference – the non-subtitled finale will be simultaneously broadcast with the U.S. West Coast telecast (May 23, from 9:00 p.m., PT) on Sky1 in the UK, Fox Italia and Telecom Italia in Italy, Cuatro Spain, Fox Spain and Portugal, Digiturk Turkey, HOT Israel. CTV Canada will broadcast the finale at the same time as the U.S. East Coast.

In total, 59 countries around the world will air the final episode from 24-48 hours after the U.S. broadcast, with subtitles for viewers in non-English speaking territories. The series is licensed as part of their existing ‘Hot from the U.S.’ agreements with Disney Media Distribution, which bring series such as “Lost,” “Desperate Housewives” and “Grey’s Anatomy” to international platforms in a 24-48 hour window from U.S. broadcast.