Funny lady Judy Grier will be making a guest appearance on the March 10 new episode of Modern Family. I approve of this guest star, as Judy is hilarious (two words: Arrested Development). Although…is it just me, or does she look completely different with this new hairdo? In some photos, you have to squint really hard to recognize her. She doesn’t look bad…just different. Anyway, ABC has released promo photos and a synopsis for the March 10 episode, which you can view below.

Note: This episode was originally supposed to air on March 3, but was pushed back to March 10. 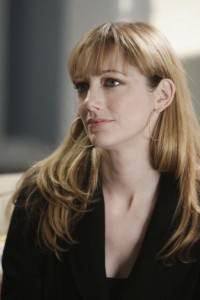 THE TRUTH COMES OUT, ON ABC’S “MODERN FAMILY”

“Truth Be Told” – After reconnecting on Facebook, Phil invites his old high school girlfriend (guest star Judy Greer) to drop by the house, but this friendly visit quickly turns into trouble. Meanwhile Jay accidentally kills Manny’s beloved pet turtle, then goes to extremes to cover his tracks, and an overworked Mitchell finally stands up to his boss, on “Modern Family,” WEDNESDAY, MARCH 10 (9:00-9:30 p.m., ET), on the ABC Television Network.

Guest cast include Judy Greer as Denise and Bruce Altman as Mr. Jennings.