A new episode of Private Practice will be airing this week on May 6 and we have promo photos and a synopsis for you below from ABC.

You can also view a sneak peek from this upcoming episode. 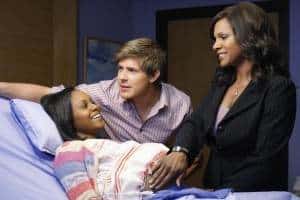 NAOMI BRINGS BACK A FRAIL WILLIAM AND IS DESPERATE FOR FIFE’S HELP, ON ABC’S “PRIVATE PRACTICE”

“In the Name of Love” – Naomi puts Fife in a conflicted position when she begs him to help William’s advanced ALS with his still experimental treatment. Meanwhile Violet and Amelia treat a woman with a brain tumor who has to choose between life or quality of life, and Sheldon decides to officially throw his hat into the ring for Charlotte’s affections, on “Private Practice,” THURSDAY, MAY 6 (10:01-11:00 p.m., ET) on the ABC Television Network.