The fourth season of Private Practice premieres on September 23 and we have promo photos and a synopsis from the premiere below. 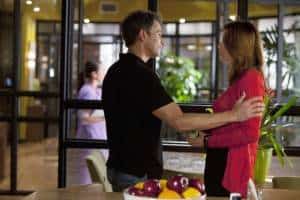 EMOTIONS RUN HIGH AS PETE AND VIOLET PREPARE TO WALK DOWN THE AISLE, ON THE FOURTH-SEASON PREMIERE OF ABC’S “PRIVATE PRACTICE”

“Take Two” – Pete and Violet anxiously prepare for their wedding day, but Cooper may have to intervene when emotions and fear of the future run high. Things have taken a surprise turn with Addison and Sam, and Naomi juggles the burden of caring for her daughter and newborn granddaughter and worries about Dink’s ability to parent. Despite disagreements and deeply-rooted conflicts, the doctors come together to mourn the loss of their friend, Dell, on the fourth Season Premiere of “Private Practice,” THURSDAY, SEPTEMBER 23 (10:01-11:00 p.m., ET) on the ABC Television Network.