Private Practice has been on hiatus for a few weeks, but a new episode will be airing this week on April 22. ABC has released promo photos and a synopsis for the episode (note: the episode was originally supposed to air at 10:00 p.m. EST, but has been moved to 9:00 p.m.). 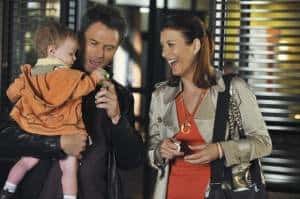 VIOLET IS BACK HOME AND NO ONE KNOWS WHAT TO EXPECT, ESPECIALLY ADDISON, ON ABC’S “PRIVATE PRACTICE”

“Second Choices” – After her open-ended escape to Costa Rica, Violet has finally returned home and to the practice. Everyone treads a little lightly around her, especially Pete and Addison who have mixed feelings about Violet’s desire to reconnect with Lucas. Meanwhile Amelia butts into Sam’s personal life, pointing out that he can mend hearts in the OR but can’t seem to do that for himself; and Sheldon encourages Charlotte to reconcile with Cooper, while Cooper deals with a young patient who eats everything in sight, on “Private Practice,” THURSDAY, APRIL 22 (9:00-10:00 p.m., ET) on the ABC Television Network.

Note: This program was originally scheduled for 10:00 p.m.