A little while ago we posted promo photos for the tenth and final season premiere of Smallville, which is set to air on September 24. They primarily featured Clark and his father (who is returning for a guest appearance). Now the CW has released additional promo photos for the episode featuring Lois Lane in serious trouble. 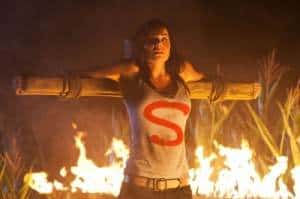 The season premiere picks up where the finale left off. Lois (Erica Durance) finds Clark’s (Tom Welling) lifeless body and removes the blue kryptonite enabling him to heal himself. However, Lois sneaks away before Clark fully awakens in order to protect his secret.

Meanwhile, Chloe (Allison Mack) is desperate to find Oliver (Justin Hartley), so she turns to an unlikely source for answers. Jonathan (Schneider) returns to the Kent Farm with a message for Clark, and Tess (Cassidy Freeman) awakens in a LuthorCorp lab.