Michael Ironside will be making an appearance as General Lane on the November 5 new episode of Smallville. Below are promo photos and a synopsis from The CW. 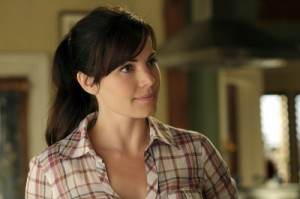 GENERAL LANE AND LUCY LANE RETURN TO SMALLVILLE FOR THANKSGIVING

The General (guest star Michael Ironside) and Lucy Lane (Peyton List) decide to drop in on Lois (Erica Durance) and Clark (Tom Welling) for a surprise Thanksgiving dinner. Clark and the General get off to a rocky start after Lois’father bashes the superheroes and tells Clark he is trying to pass a vigilante registration law.

Meanwhile, in an effort to stop the vigilante registration act from being passed, Rick Flagg (guest star Ted Whittall) lies to Lucy in order to lure Clark away from the farm long enough for him to assassinate the General. Lois is torn between making her father proud and her love for Clark.