The two-hour Smallville TV movie, Absolute Justice, will be airing on February 5. A few days ago, we posted a short promo for this special episode and now the CW has released several promo photos, which you can view below.

You can also check out a longer promo at EW. 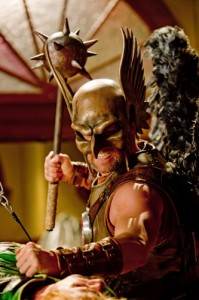 DC COMICS’ CHARACTERS HAWKMAN, STAR GIRL AND DR. FATE FROM THE JUSTICE SOCIETY OF AMERICA MEET UP WITH CLARK AND HIS TEAM IN A SPECIAL TWO-HOUR EVENT

A man named Sylvester Pemberton (guest star) tracks down Chloe (Allison Mack) and tells her he knows about her team of superheroes and needs their help. However, before he can explain who he is, he is attacked and killed by Icicle (guest star Wesley Macinnes). Clark (Tom Welling) and Chloe’s (Allison Mack) investigation leads Clark to the former headquarters of the Justice Society of America where he meets up with Nelson AKA Dr. Fate (guest star Brent Stait), Carter Hall AKA Hawkman (guest star Michael Shanks) and Courtney AKA Star Girl (guest star Britt Irvin).

Courtney pleads with Hawkman and Dr. Fate to help her catch the killer that is targeting their group but they are reluctant to resume their duties as superheroes. Clark, John Jones (guest star Phil Morris), Green Arrow (Justin Hartley) and Chloe team up to help the JSA stop Icicle before he murders another member of the group. Meanwhile, Lois (Erica Durance) receives a package from a mysterious agency called Checkmate, run by Amanda Waller (guest star Pam Grier).