Expect a run of new episodes for The Vampire Diaries. A new episode will be airing on April 15 and the CW has released promo photos and a synopsis for the episode. David Anders (previously seen as a guest star on Heroes) will be making an appearance as Elena’s uncle. 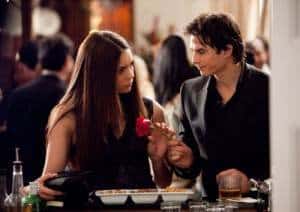 While Stefan (Paul Wesley) struggles to control his new situation, Elena (Nina Dobrev) and Jeremy (Steven R. McQueen) are surprised by a visit from their uncle, John Gilbert (guest star Anders). Alaric (Matt Davis) has an awkward talk with Elena about Isobel. At a Founder’s Day event, Stefan displays a rare party attitude and Damon’s (Ian Somerhalder) attempt to find out why Uncle John has returned to town takes an ugly turn.

An incident at the party causes trouble between Matt (Zach Roerig) and Tyler (Michael Trevino), and the relationship between Matt and his mother, Kelly (guest star Melinda Clarke), reaches a new low. Meanwhile, Elena’s effort to comfort Jeremy falls short and he decides to take matters into his own hands. Sara Canning also stars.